Traditionally when hardware manufacturers are planning their next-generation console launches, there is always a systemtic market lull as consumers wait for the next generation to arrive. 2005 was no different than previous industry lulls (the last one being 1999-2000, right before the end of Nintendo 64's life cycle and before PlayStation 2's debut.), and like other industry lull, it was a time where innovative software took the lead as developers have mastered the platform and attempted to sqeeze every bit of extra power from the aging systems. The end of 2005 also saw the first entrance into the Next Generation Console group with Microsoft's Xbox 360. Although the system suffered from major supply shortage, it still managed to become 2005's must have gift.

However, in contrast to the diminished home console segment, the Handheld arena overachieved beyond all expectations. After Nintendo DS's worldwide launch in 2004 (which was described as mediocre Japan or even abysmal North America) and Sony PlayStation Portable's "Paper Launch" in Japan, both handheld manage to perform better than expected, carrying the game market through 2005 with innovative titles and pinnacle franchises. What was even more surprising was the performance of Game Boy Advance and it's two redesign iterations: Game Boy Advance SP and Game Boy micro, which manage to outsell the combine sales of the Nintendo DS and PlayStation Portable.

Ageia's announcement of their PhysX Dedicated physics processing card created a stir as industry observers debated on the viability of a dedicated physics card in gaming machines, and how well the adoption rate of such technology will be. Although the product won't be released until 2006, many PC developers have expressed interest in the card and have pledge support of such an expansion card when it arrives.

In contrast, PC Software can be described by one video game: World of Warcraft, which remains the talk of the industry, breaking 5 Million suscribers worldwide, becoming the biggest MMORPG and drawing in newbies to the genre who have never played a MMORPG before. The emphesis of highly detailed, rich graphics and atmosphere created by First-person shooters in 2004 like Doom 3 and Half-Life 2 fell wayside as many players have yet to upgrade to the latest video cards by nVidia or ATI (hardware shortage again is the culprit). Some were also wary of the continuous flood of first-person shooter video games, even though there has been numerous AAA titles such as F.E.A.R., Battlefield 2, and Quake 4.

Duke Nukem Forever is now in its 8th year of production, and now slated for a 2006 release. 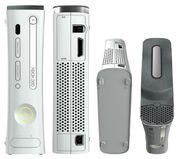 The Xbox 360 arrived towards the end of the year becoming one of this years most sought after Christmas gifts. The 360 quickly sold out in the western world leaving only those who were willing to pay exorbitant amounts of money on eBay able to get one. It was, however, a different story altogether in Japan where new consoles sat on shelves quietly waiting for buyers that never arrived. The 360 is what could be called the next logical step for Microsoft to take in the home console market. It takes a leap in computing power that all next gen consoles take and features a removable hard drive, an upgraded Live service that would feature downloadable content and would create a new virtual marketplace, as well as what could be described as a more refined Controller S.

The launch titles for the 360 were diverse, if you exclude RPG's, with some lacking in quality and some in features. Perfect Dark Zero for example, the much anticipated FPS released by Rare, was met with less than stellar criticism. This coming from a developer that many gamers held dear from the N64 days. Rare redeemed themselves with the release of Kameo: Elements of Power, an action game for the 360 which was met with positive reviews and praise among gamers. Call of Duty 2 by EA also hit the street at launch and was applauded for its immersive single player campaign but criticized for lacking a lobby system, among other issues with online play, that Xbox Live players are so accustomed to. Another title during the launch came from left field, Gun, released by Neversoft who are known for their Tony Hawk games, set in the wild west. The game based on the remake of King Kong titled Peter Jackson's King Kong came out a shook some of the stereotype that all movie inspired games are horrible.

At this year's Electronic Entertainment Expo, Nintendo shocked the audience with the announcement of Game Boy micro, another revision of the Game Boy Advance hardware. Riding on the wave of portable electronic miniaturization, the Game Boy micro is roughly the size of three Game Boy Advance cartridges. The new portable system has a brighter screen, longer battery life than the Game Boy Advance SP, and a new digital volume control buttons (doubles as Start/Select button during gameplay) that replace the volume slider control in previous Game Boys. However, these upgrades are at the expense of a smaller screen and lack of Original Game Boy and Game Boy Color compatibility.

First original main Resident Evil game since Resident Evil 0, it was ported to PS2 in late 2005 as Capcom breaks it's exclusive deal with Nintendo.

Critically acclaimed title met with underwhelming sales, Oddworld Inhabitants's decision for making this title platform exclusive is often pointed as the source of failure. Lorne Lanning, co-founder and president, has since announced his departure from the gaming world.

The first big killer app for the Nintendo DS, this game demonstrates the full potential of the touch screen and microphone with it's large variety of microgames.

Largely considered the best Tekken yet, at the time of it's release.

A highly difficult action game that brought the Devil May Cry series back to its roots.

Another critically acclaimed title met with underwhelming sales, EA's lack of marketing for this title and their inability to wrestle attention away from platform exclusive First-person shooter titles such as Halo 2(Xbox) or even Killzone(PS2) is often cited as the source of failure.

One of the PSP's launch titles and the first PSP game to feature downloadable content.

A graphicaly impressive launch title for the PSP developed by Namco.

The long awaited MMORPG based on the Matrix universe finally arrives after being dropped from Ubisoft.

Original release by BioWare following up their Star Wars: Knights of the Old Republic success.

The first game developed by Double Fine Productions, this game from Tim Schafer featured stunning art direction and a unique story. It was met with horrible sales. Some gamers have said it would have faired better on the GameCube, the one platform it was not released on.

This GBA game came in a cartridge with a built in gyro sensor that allowed for all new crazy microgames.

Another entry in the best-selling Madden series.

Japanese sleeper-hit that got 40/40 in Famitsu reaches western shores, to see if it would meet the same level of success.

Sequal to the critically acclaimed Black & White, this

Third entry in the famous Age of Empires series in over 5 years.

First game by the development team since the cult hit ICO.

The first 3D Fire Emblem, and first to be on a home console since the SNES.

After numerous delays and three platform moves (This game began life as a Nintendo 64 title, then moved to GameCube and eventually XBox), the long awaited game makes it debut as a launch title on the Xbox 360.

This title marks Nintendo's first online enabled game on the Nintendo DS and the launch of the Nintendo WiFi service.

The 2nd Nintendo WiFi Connection game for the DS.