The game is a horizontal scrolling shooter in which you take control of a jetpack propelled space warrior who travels between Parallel universes and worm holes (hence 4-D, or 4 dimensions) throughout the game. By flying over the top of the play field, you end up in an alternate universe. You travel back and forth defeating enemies until you reach a boss creature. On some occasions a worm hole will appear in the middle of the play field and you are taken to even stranger worlds... 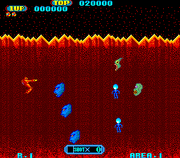 The blue zone is where the level boss first appears. Once the boss is sufficiently damaged, it will retreat to the red zone, where you can destroy it and advance to the next level. When the boss is not present, the level contains a selection of enemies that behave similarly to those in the red zone, although their appearance is somewhat different. By going over the top of the blue zone, you can return to the red zone.

Several randomly occurring phenomena in the red zone can take you to other worlds: