An action-adventure video game (also known as 'arcade adventure game') is a video game that combines elements of the adventure game genre with various action game elements. It is perhaps the broadest and most diverse genre in gaming, and can include many games which might better be categorized under narrow genres.

With the decline of the adventure game genre from mainstream popularity, the use of the term (and the hybrid term "action-adventure") has been more liberal. It is not uncommon for gamers to apply the term "adventure" or "action adventure" to describe the genre of fiction to which a game belongs, and not the gameplay itself.

There is a distinction between thematic genres and gameplay genres, as in this case they have very different meanings and etymology. "Adventure" has no thematic or narrative meaning nor any connection to adventure movies. Similarly, while action games usually do have violent themes similar to action movies, this is not a requirement.

Action-adventure is a hybrid genre, and thus the definition is very inclusive, leading it to be perhaps the broadest genre of video games. Typically, pure adventure games have situational problems for the player to solve, with very little or no action. If there is action, it is generally confined to isolated minigames. Pure action games have gameplay based on real-time interactions that challenge the reflexes. Therefore, action-adventure games engage both reflexes and problem-solving, in both violent and non-violent situations.

Although action-adventure games are diverse and difficult to classify, there are some distinct sub-genres. Popular sub-genres include:

Action-adventure games are faster paced than pure adventure games, and include physical as well as conceptual challenges[6] where the story is enacted rather than narrated.[8] While motion-based, often reflexive, actions are required,[4] the gameplay still follows a number of adventure game genre tropes (gathering items, exploration of and interaction with one's environment, often including an overworld connecting areas of importance, and puzzle-solving).[2] While the controls are arcade-style (character movement, few action commands) there is an ultimate goal beyond a high score.[2] In most action-adventure games, the player controls a single avatar as the protagonist.[3] This type of game is often quite similar to role-playing games.

They are distinct from graphic adventures, which sometimes have free-moving central characters, but also wider variety of commands and fewer or no action game elements and are distinct too from text adventures, characterized by many different commands introduced by the user via a complex text parser and no free-moving character. While they share general gameplay dynamics, action-adventures vary widely in the design of their viewpoints, including bird's eye, side-scrolling, first-person, third-person, over-the-shoulder, or even a 3/4 isometric view.

Many action-adventure games simulate a conversation through a conversation tree. When the player encounters a non-player character, they are allowed to select a choice of what to say. The NPC gives a scripted response to the player, and the game offers the player several new ways to respond.

Due to the action-adventure sub-genre's broad inclusive nature it causes some players to having difficulty finishing a particular game. To compensate for this lack of the player's ability, companies have devised ways to give the player help, such as helpful clues, or allowing them to skip puzzles outright.[9]

According to Roe R. Adams (who worked on the Wizardry series of RPGs), early action-adventures "were basically arcade games done in a fantasy setting," pointing to Castlevania, Trojan and Wizards & Warriors as examples.[12]

The action-adventure later became an established genre with Shigeru Miyamoto's The Legend of Zelda (1986), which became a success due to how it combined elements from different genres to create a compelling hybrid, including exploration, transport puzzles, adventure-style inventory puzzles, an action component, a monetary system, and simplified RPG-style level building without the experience points.[13] The game was also an early example of open world, non-linear gameplay, and introduced innovations like saving on battery backup. It became one of the most influential games of the 8-bit era, inspiring action-adventures like Metroid and RPGs like Final Fantasy.[14] Zelda has since remained the most prolific action-adventure game series through to the present day.[15] Zelda also created the open world action-adventure subgenre, which was later popularized by Grand Theft Auto III (2001).

Metroid, which featured a side-scrolling platformer format, itself created the Metroidvania platform-adventure sub-genre. Similarly, Metal Gear (1987) laid the foundations for the stealth game sub-genre, which would later be popularized by Metal Gear Solid (1998).

The cinematic platformer Prince of Persia (1989) featured action-adventure elements, inspiring games such as Another World (1991) and Flashback (1992). Alone in the Dark (1992) featured the use of 3D graphics, which would later be popularized by Resident Evil (1996) and Tomb Raider (1996). Resident Evil in particular created the survival horror sub-genre, inspiring titles such as Silent Hill (1999) and Fatal Frame (2001).[7] The action-adventure game genre has gone on to become more popular than the pure adventure games and pure platform action games that influenced them.[16]

The following diagram shows the roots and influences of action-adventure games: 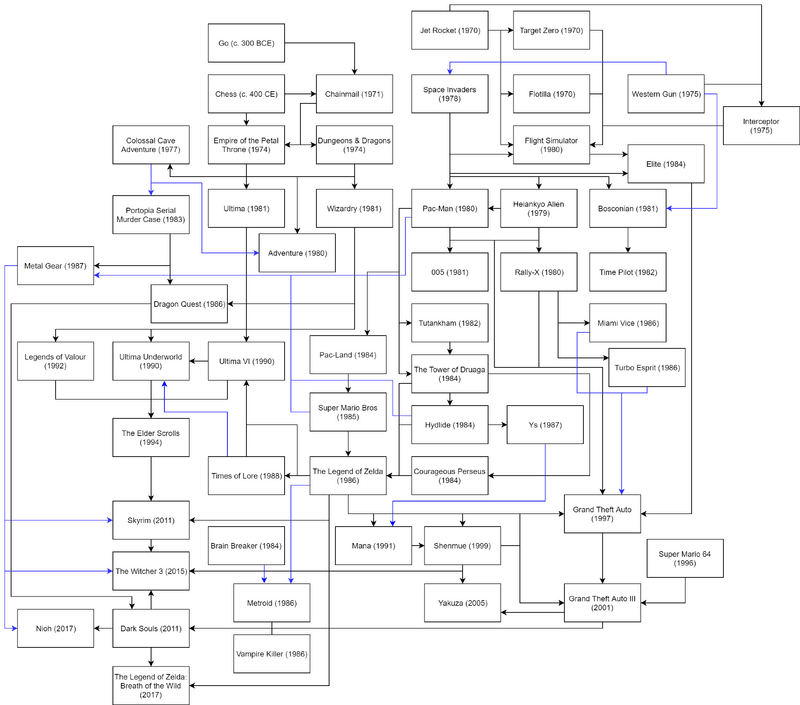