Well, it seems that Black Hole still haven't learned their lesson. This time, they have their sights set on Omega Land. Advance Wars: Dual Strike is the first Nintendo Wars game to reach the Nintendo DS, and the first to be incorrectly named (If the original Advance Wars hadn't made such a splash in North America, Intelligent Systems may have continued the tradition and named this DS Wars.)

Instead of focusing on the same Orange Star three (Max, Andy and Sami), they throw the player following two new Orange Star COs from Omega Land: Rachel, sister of Nell, and Jake, the clubbin', phat beat lovin' cool one.

In Advance Wars: Dual Strike, the core gameplay is the same as previous games. It goes like this:

In the campaign mode, you go from map to map in a mostly linear fashion. Each map, you battle. You get to choose which CO(s) to use before each battle. COs have different strength and weaknesses. When COs fill up their power meter (Which is done by doing lots of destroying, or being abused a lot), they can use their CO power or Super CO power. These powers can increase your money, do damage to the enemy, increase movement, or give bonuses to some units, depending on who you're using. SCO powers are stronger, but you'll need to stock up more power to use them.

The game is turn-based, and each set of turns (1 by you, 1 by the enemy) is one day. In each map, you use Infantry to capture cities & factories. Capturing these will get you +1000 funds per day. You use these funds to buy more units at factories that you capture or start out with. Weak units like Recons are cheap. The strongest units, like Megatanks and Bombers, cost a lot more.

Movement of these units depends on the unit type and terrain. Ships can only travel in water, and aircraft cannot be affected by terrain. Every unit has a limited amount of fuel and ammo. Restoring these can be done with an APC (a type of unit), or by having the unit spend a turn on a home city/factory. 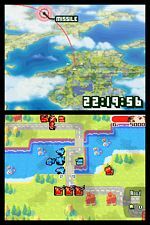 A real time counter...but the turns are in days.

You will lose if all your units are destroyed, if your HQ is captured, or if you fail to complete the objective. The objective varies. Sometimes you have to capture the enemy HQ, sometimes you'll have to defeat the enemy under a time limit. There are also side quests that you run into by capturing specific cities. These side quests serve to let you build new units that were invented by the enemy Black Hole.

The biggest and most effective change to the gameplay is the experience points (EXP) gain by COs. You gain EXP by completing maps in Campaign mode, or by playing the War Room mode. The amount of points (depending on your speed, power and technique on a map) becomes your EXP and is given to the CO you used when you win. To level up, you need 1,000 EXP, at which point it goes back to 0 again. A typical mission can get you 200-400 EXP. The maximum level is 10.

When a CO levels up, more skills become available. At first, you can equip only one at a time, but as you level up you can equip as many as four at a time. These skills are like bonuses that COs normally have. For example, the skill "Backstab" will make all hidden/submerged submarines and stealth bombers do more damage. The skill "Urban Fighter" will make attacks 10% stronger when coming from cities. These skills and more can be used to make up for weaknesses, or amplify strengths.

Tag battles let you use Two COs in a map. They aren't used at the same time, you have to switch them in or out. Switching COs in or out ends a turn. This opens up new strategies, such as attacking with a strong character, and then switching to a more defensive one to end the turn. Tag battles also feature "Dual Strike" CO powers. This, essentially, lets a player take two turns in a row, allowing battles to shift drastically. It is done when two team mates reach Super CO Power status.

There are new and old modes in Advance Wars: Dual Strike.