Age of Empires II: The Age of Kings

Age of Empires, abbreviated to AoE or AOE, is a historical real-time strategy video game released in 1997. Developed by Ensemble Studios and published by Microsoft Corporation, the game uses the Genie engine, the same 2D sprite-based game engine used by Age of Empires II and Star Wars: Galactic Battlegrounds. The game allows the user to play as the leader of a historical tribe or civilization from the Stone Age up until the Iron Age. The game later had an expansion pack released for it, Age of Empires: The Rise of Rome, and was later re-released as Age of Empires: Gold Edition. 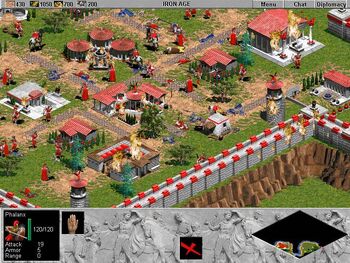 Age of Empires consists of various single-player scenarios in which the player is required to complete specific objectives. Campaigns are a collection of scenarios which are completed in a linear fashion. The original Age of Empires included 4 campaigns, based on the Egyptian, Greek, Babylonian and Yamato civilizations. Besides the campaigns, the other main type of single-player gameplay is the 'random map' mode (where the map is generated randomly).

Age of Empires featured online and network play with up to 8 players simultaneously. A mix of random map and deathmatch games were popular among online players, including some deathmatch variants where players can only use specific units (e.g. 'Legions'), or a combination of other restrictions.

In Age of Empires, twelve civilizations are available, sorted into four distinct architectural styles which determine their in-game appearance:

A major component of the game is the advancement through 'ages'. There are four ages; Stone Age (Paleolithic), Tool Age (Neolithic), Bronze Age, and Iron Age. Researched at the Town Centers (for a considerable cost in resources), age advances allow for the availability of more advanced buildings, units and technologies to the player. In order to advance from one age to the next, at least two buildings from the current age must be built, and the player must have the required food (and gold in later ages) available in their stockpile.

Technology plays a very important role in the strategy of the game. As a civilisation progresses through the ages, technology becomes more and more expensive.

Villagers are the most basic units in Age of Empires. Their primary function is to collect resources. Food is acquired by hunting, foraging, farming, and fishing. Villagers can construct buildings, as well as repair both buildings and naval vessels.

Priests are non-combat units which can heal allied units or "convert" enemy units (in which case, the target unit changes allegiance). Infantry units, such as clubmen, swordsmen, and hoplites use melee combat to attack at short range. Mounted units include chariots, cavalry, and war elephants. Archers, mounted or on foot, attack at range. Siege units come in two types: catapults and ballistics.

The Town Center is one of the most important buildings in the game. Here villagers are created, and age advancement is researched. 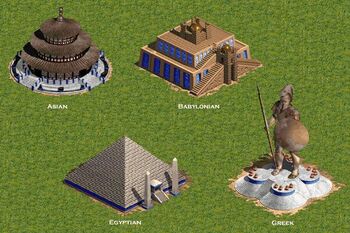 Wonders are enormous monuments representing the architectural achievements of the time. They require huge amounts of resources to build and are constructed very slowly. Wonders do not produce units or allow research. When a wonder is completed, a countdown timer begins. If the wonder is still standing at the end of the timer, the builder wins the game.