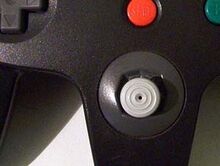 The Analog Joystick on the Nintendo 64 controller.

The analog joystick is a smaller version of the joystick that is controlled with the thumb, much like the D-pad, sometimes called 'D-stick', as it's often used to control directional movement. It's a standard input device on most 3D consoles. The difference between the D-pad and the D-stick is that the stick is pressure sensitive, allowing the player to control their characters speed, as well as direction, just using their thumb. Where as the older D-pad only lets the player move the avatar in 8 directions, with no control over speed.

Though the analog joystick works better for 3D games, many criticize it's use in 2D sidescrollers, as there is less of a distinct different between up or down and left or right, making it easy to accidentally duck or in some cases, even jump. Some controllers attempt to counter this by putting a plastic octagon boarder around the stick, so that when it's pushed to its limits, it 'clicks' into space in a specific direction.

The analog joystick is often used in a gameplay clich that has the player rotate the stick as fast as possible, often resulting in blistered thumbs or raw palms.

An early variation of an analog stick was the positional gun, which is effectively an analog stick mounted in a fixed location that records the position of the gun to determine where the player is aiming on the screen.[1] It was used for arcade gun games, with early examples including Sega's Sea Devil in 1972,[2] Balloon Gun (1974), [1] Taito's Attack in 1976[3] and Cross Fire in 1977,[4] and Nintendo's Battle Shark in 1978.[5]

In 1982, Atari released their first controller with a potentiometer-based digital joystick for their Atari 5200 home console. However, the non-centering joystick design proved to be ungainly and unreliable, alienating many consumers at the time.

In 1983, the Sega SG-1000 used a self-centering thumbstick, a precursor to the modern design. Released on the same day as the NES, many found the SG-1000's thumbstick controller uncomfortable and instead preferred the NES's innovative D-pad design, which would dominate game controller design for the next several generations.

In 1985, Sega's pseudo-3D, third-person rail shooter game Space Harrier, released for the arcades, introduced a true analog flight stick for movement. It could register movement in any direction as well as measure the degree of push, which could move the player character at different speeds depending on how far the joystick is pushed in a certain direction.[6]

In 1989, Japanese company Micomsoft released an analog thumbstick controller for Sega's Mega Drive called the XE-1AP. Game Pilgrimage describes it as follows: "It's an analogue controller featuring independent 3-Axis analog support and compatibility with the following systems: MSX, PC-8801, X68000, FM-Towns, FM-Towns Marty, Mega Drive, Mega CD, 32X and PC Engine (requires an adapter)." They also stated it is "well constructed and very comfortable to use" and it features "calibration screws" and an "axis swap switch at its back."[7]

In 1994, the Neo Geo CD console came with a standard gamepad that featured an analog thumbstick in lieu of a D-pad.

Nintendo unveiled their Nintendo 64 controller on November 24, 1995.[8] Initially announced for release on April 21, 1996, Nintendo released their Nintendo 64 controller on June 24, 1996 in Japan.[9] The stick operated on the same principles as a mechanical computer mouse, providing various levels of sensitivity. It also distinguished itself by having the player control it with the thumb, similar to a D-pad, rather than gripping a handle.[10] The new controller introduced the modern thumb-operated analog stick which allowed for a varying levels of movement and 360-degree control, translating into far more precise movements than were possible with a D-pad. The Nintendo 64's analog stick proved to be a success, and the idea soon caught on.

On 26 April 1996,[11] Sony released a potentiometer-based analog joystick for use in Flight-Simulation games. The Sony Dual Analog FlightStick featured twin analog joysticks and was used in games such as "Descent" to provide a much greater degree of freedom than the typical digital joysticks of the day.

Within weeks of Nintendo's announcement, Sega revealed their own analog controller in May 1996. [2] The Saturn's analogue controller was mentioned in the June 1996 issue of Computer and Video Games magazine.[12] On July 5, 1996, Sega released Nights into Dreams for their Saturn console in Japan; bundled with it was the Saturn 3D control pad which featured an analog pad intended to give the player more fluid control over that game's flight-based gameplay. The controller would also serve as a basis for the Dreamcast controller.[13]

How Stuff Works articles on: