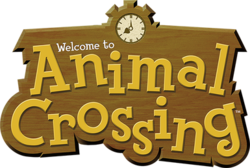 Animal Crossing (known as Dōbutsu no Mori meaning Animal Forest in Japanese) is a casual life simulation game series developed and published by Nintendo.  Its first release was the Japan-exclusive title Dōbutsu no Mori, released on the Nintendo 64 in 2001.  After its success there, the game became available in other regions when Animal Crossing was released on the GameCube. The most recent installment of the series is Animal Crossing: New Leaf for the Nintendo 3DS, released in Japan in 2012 and then worldwide in 2013.

The Animal Crossing series involves playing as a character moving to a town with anthropomorphic animals as its residents.  In most of the games, the player is a simple citizen of the village, but in New Leaf they are mistaken as a mayor moving in and different play options not available in prior games exist.  The player can interact with their animal neighbors, buy clothing items to customize their character, decorate and furnish their virtual home, celebrate in-game holidays, and visit other players' towns via different methods in each game.  One feature of the series is that the Animal Crossing games run in real-time, utilizing the system clock's time as the time in the game.  Shops are only open throughout certain times in the day, and only a couple of a town's citizens, if any, will be awake late at night.