While Arbok seems to resemble a large, purple cobra, its behavior is more similar to that of a boa constrictor, despite the fact that it is venomous. It will wrap itself around its foe and squeeze with strength that can flatten steel oil drums.

Similar to the cobra, it has big warning markings on its hood arranged in a face-like pattern that varies from region to region, (This could be an example of allopatric speciation, compare with Shellos and Gastrodon), and this serves to frighten away timid foes at the mere sight of it. There are at least six distinctive variations of Arbok's hood pattern, each one apparently indigenous to a different region. If Arbok encounters an enemy, it will raise its head and make eerie sounds or glare to frighten it. If the enemy is too afraid to run, Arbok then binds and poisons it. Much like the mythological Basilisk it can paralyze foes with its stare.

Arbok is found only in Pokémon Red, Silver, Crystal, FireRed, and Pokémon XD: Gale of Darkness, and in the latter can be snagged from Cipher Peon Smarton. In Pokémon Gold, it is possible to buy an Ekans that can be evolved into Arbok. In other games, it or Ekans must be traded from the versions they are available in.

Arbok's attack and speed are average, and the rest of its stats are below average. It slightly makes up for it with the ability Intimidate, which lowers the foe's attack 1 stage upon switching in. Arbok can be compared to Seviper for battle. Statistically, Arbok is more defensive, while Seviper is more attack-oriented. Seviper is able to learn Poison Fang by leveling up, but Arbok must learn it from Seviper as an egg move.

In Pokémon Diamond and Pearl, Arbok can learn Ice Fang through the move tutor, allowing it to defend itself from ground types.

In the Pokémon anime, Arbok has been an important character until recently. Team Rocket's Jessie received an Ekans for her birthday some years ago, and early in the series both she and James force their Pokémon to evolve, and when they failed, they evolved on their own after seeing how upset they were. Arbok made frequent appearances, especially early on, although in recent episodes Jessie and James left both Arbok and Weezing behind to defend an unevolved herd of Ekans and Koffing from a poacher. Before its departure from the series, Arbok was frequently called upon to use its Poison Sting attack, which often backfired to puncture Team Rocket's signature Meowth hot air balloon and send the trio "blasting off again."

As Team Rocket are often called the most emotionally developed characters in the series, Arbok, as well as Weezing, served as perfect mirrors of their owner's characters early on. At first glance, just like the Pokémon she owns, Jessie appears to be nothing more than a snake. Equally, James resembles his own Pokémon as being nothing more but full of hot, useless air. The release of these Pokémon, while not only noble and showing the moral progress of both Jessie and James, is symbolic of their ultimate development as characters. After Arbok is released, Seviper replaces it as Jessie's snake Pokémon.

During the episode "A Fan With A Plan", the "Trainer's Choice" feature claimed that Seviper evolves from Arbok; however, this was incorrect and caused Pokémon staff to tape over the segment of the show.

Koichi Sakaguchi provides the voice of Arbok in both the Japanese and English versions of the anime.

Koga and Agatha both have Arbok as important parts of their teams in Pokémon Special. In Pokémon Special, the pattern on an Arbok's belly may give an Arbok special abilities. With the help of Agatha's smoke, Agatha's Arbok had the ability to switch between a bunch of different patterns (see Issue 71), a speed boosting pattern, an attack boosting pattern, and an Invulnerability Pattern that repels poisons, Koga's Arbok, on the other hand, only has one pattern, which was a Regnerative pattern that allows it to regnerate any part of its body as long as the head remains intact. According to Pokémon Yellow, that leaves two patterns left undiscovered (if Koga's is the standard one).

Pokémon Special Pokedex entry (issue 71): It is rumored that the ferocious warning markings in its belly differ from area to area.

An Arbok is one of the antagonists in Pokémon PiPiPi Adventure. 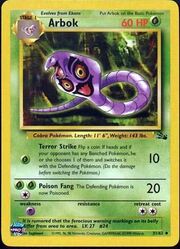 Arbok from the Pokémon TCG

Arbok has made nine appearances on the Trading Card Game so far: