Ariados (アリアドス, Ariadosu) is a fictional species of the Pokémon franchise.

The name Ariados is a portmanteau of Ariadne and Dos, meaning 'two' in Spanish, as it is the second form of Spinarak, or because it can spin webs out of both its mouth and a gland on the opposite end.

Ariados can be viewed as a cross between a spider and an ant. It has six legs with two of its legs near its rear, possibly serving as antennae, as well as a small horn on its forehead and large eyes. There are small pincers on either side of its mouth that aid in gripping and chewing.

Ariados is able to spin silk out of both its mouth and rear, which is advantageous against unsuspecting foes. It captures prey by spinning its strong silk around the prey, rendering it helpless to be devoured or carried back to the nest.

Ariados' feet end in hooks that allow it to grip well enough to walk on vertical surfaces and on horizontal surfaces upside-down.

A design on Ariados' rear that is shaped like a face, is used to ward off foes and predators, similar to the Happy Face spider.

Ariados uses its nest as a base of sorts. A strand of silk is constantly spun from its rear that leads back to its nest. This allows it to wander in search of food, which it usually does at night. This is in contrast to its unevolved form, Spinarak, which instead waits patiently for its prey to come to its web.

Ariados is sometimes seen traveling in packs or swarms.

As many Pokémon have a cultural basis from other products, Ariados bears a striking resemblance to Kumonga, the giant spider of the Godzilla movie series. Both seem to have been based on the same kind of spider as their legs are the same black-and-yellow color.

In Pokémon Gold and Crystal, Ariados are rare and were one of the few Pokémon that could only be found at night. They evolve from Spinarak, which are somewhat more common. Neither evolution could be caught in Pokémon Silver, so they needed to be traded from Gold or Crystal.

In Pokémon Ruby, Sapphire, Emerald, FireRed, and LeafGreen, Ariados cannot be found in the wild and must be evolved from Spinarak. However, in Pokémon Colosseum, an Ariados can be "Snagged" and then be traded to the other third-generation games.

Ariados' stats are somewhat average, considering that it does not evolve any further. Its Attack is its best stat, which can be taken advantage of with moves like Signal Beam, a strong Bug-type attack. Ariados learns the move Spider Web, a bug-type move exclusive to Ariados which preventes foes from escaping. Ariados is often instead used as a Pokémon to battle in-game trainers in the early stages, as Ariados evolves at an early level and is favored by many trainers due to its ability to learn Dark/Ghost type attacks.

In the Pokémon anime, Ariados first appears in Episode 178, Ariados Amigos!, in which it belongs to a ninja and aids in thwarting Team Rocket's usual thievery. The next time it appears is in Episode 229, For Ho-Oh the Bells Toll, in which a number of wild Ariados are among the Pokémon that become aggressive in defense of the sacred bells of Ho-Oh, which Team Rocket attempted to steal. Later, in Episode 290, All In A Day's Wurmple!, a trainer named Forrester uses an Ariados and a Yanma in a double battle against Ash's Pikachu and Treecko. The battle is close, but Ash emerges victorious.

In the fifth Pokémon movie, Pokémon Heroes, two Team Rocket members, Annie and Oakley, use their Espeon and Ariados to aid in their plot to capture Latios and Latias.

One of May's rivals, Harley, has an Ariados, which is one of his signature Pokémon. It was once used against Jessie's Wobbuffet in a battle and 'won' by using String Shot.

Also, in "Following a Maiden Voyage", Dawn rescues several Pokémon from an Ariados.

An Ariados was also used by J, the Pokémon Hunter in "Mutiny in the Bounty." She uses her Ariados to tie up trainers as she proceeds to steal her victims' Pokémon.

Since Volume 11, Janine is seen with an Ariados. She uses its string to help her scale buildings. It appears once again in Volume 13, when she uses it to take on Falkner. She explains here that Ariados can spit string for making webs using its spinneret, as well as spit a different type of thread for attacking from its mouth. This second type of thread is so sharp, it even cracks the metal body of Falkner's Skarmory. 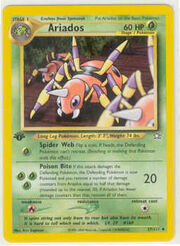