Flying through space with the greatest of ease 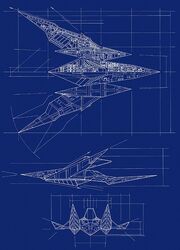 Kids, build your own!

Primary fighter craft of team Star Fox. The Arwing is a small, highly maneuverable flight and space craft, capable of complex aerial acrobatics as well as having a full-featured weapon system of laser blasters and smart bomb launchers. In Star Fox: Assault, it's 4 G-Diffusers allow it to come to a complete stop, compared to the 3 G-Diffusers of the rival craft, Wolfen.

The Arwing's two protruding wings are especially susceptible to damage. The Arwing is designed so that it can survive without them - if they are broken off, the craft can continue to fly, though with limited maneuverability.

If an Arwing does a quick barrel-roll it can use its wings to deflect incoming laser fire.