For the arcade games based on the Marvel Comics license, see Captain America and the Avengers and Avengers in Galactic Storm. 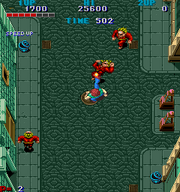 Avengers (必殺 無頼拳, Hissatsu Buraiken?, lit. "Deadly Ruffian Fist"), also known as Avenger, is an overhead-view vertically scrolling beat 'em up arcade game released by Capcom in 1987. The game was developed by Takashi Nishiyama, who later co-planned the original Street Fighter and a few of SNK's early fighting games. It was later included on Capcom Classics Collection: Remixed for the PSP and Capcom Classics Collection Vol. 2 for the PlayStation 2 and Xbox.

The game takes place in Paradise City, where the villain, "Geshita", has captured 6 girls from the city. The player's objective (as Ryu or Ko) is to banish "Geshita" from Paradise City once and for all. During the game, the player can pick up powerups like the "Speed Up", the Super Punch, Grenades, Shurikens, Nunchaku and extra health. The player's character has 3 normal means of attack: Punches, which are quick with short range, Kicks, which are slower with longer range, and the Roundhouse, which hits in a 360 degree motion.

"Hissatsu Buraiken" was later used as the name one of Dan's Super Combo technique in the Street Fighter Alpha games.