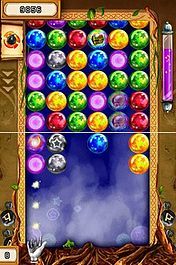 Ball Fighter is a puzzle game for one or two players. The game’s mechanics is based on removing colored spheres from the well. Spheres move from the top of the screen to the bottom and when they reach the bottom, a player loses the game. The player has to catch the spheres and throw them back to the well to connect at least three of the same color in one column and to make them disappear. Additional bonuses can make the game easier for the player or more difficult for the player’s opponent.

Besides standard spheres removal and removal with the bonus spheres the player can make combos. The combo is made if the player removes more than two sphere chains fast, one after another. It can be done either automatically (dropping spheres connect into chains) or activated by the player (if the player is fast then he or she can throw new spheres before the combo bar drops to zero). Combos allow the player to earn much more points in the single-player modes and put more spheres in the opponent’s well in the multi-player mode.[2]

Ball Fighter received an overall score of 7/10 from Nintendo Life.[4]