The sequel to the N64 game, BattleTanx. In its story mode, your character from the last game has a rare child who has telepathic powers. So, tank bashin' chaos ensues. The game was ported to the PlayStation a mere few months later, although it lacked 4 person Multiplayer. The game has more levels, tighter controls and secondary weapons than the first game. 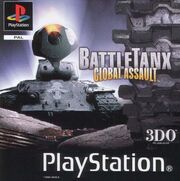