The English name Bellossom is a combination of the words "bell" and "blossom", with a more subtle usage of the Latin root "bella" as "beautiful." Its Japanese name is Kireihana (キレイハナ), which means "beautiful flower." Like other Pokémon of its type, Bellossom likes sunlight and hates shade.

Bellossom is a diurnal plant pokémon. It evolves from Gloom if exposed to a Sun Stone. Because of this, it lives mostly in tropical climates or areas exposed to lots of sunlight. It is also noted that a Bellossom will be even more beautiful if it was an especially rancid Gloom. The worse it smells as a Gloom, the prettier its petals will be as a Bellossom. Although naturally a peaceful and friendly Pokémon, it can be very territorial and violent fights can break out if there is an intruder or a challenger. Despite this, it is very social in areas outside of its self-determined territory, and the most common time to find a group of Bellossom together is when they all meet in one location to dance. It is said that these dances summon the sun. This dancing nature, added to its appearance, makes it look like a hula dancer

Bellossom's petals can rotate, and they usually do when it is absorbing sunlight. The color of their leaves vary from a sick-looking brown and grey to a fluorescent yellow and red, depending on how much sunlight it has absorbed in the past few hours. When its petals are moving, either due to rotating or dancing, they rub together to make relaxing, bell-like sounds; some Bellossom have been trained to control these sounds, and to make proper music with them. The petals on its head also create a sweet scent (as indicated by one of its attacks, Sweet Scent, which lures the foe close to the user, lowering its evasiveness) and is another reason why it is a desired Pokémon by many trainers.

When a Bellossom is threatened it will utilize its whole body in order to deter the foe. Its Petal Dance is a rampage of 2-3 turns in which it dances into the foe with a storm of petals striking the foe as well. It will also use its Magical Leaf to hit the foe without missing. If those attacks do not work, then it will use Solarbeam to blast the foe away with a surge of sunlight. Bellossom learns Solarbeam naturally; a TM is not necessary.

Oddly enough, Bellossom cannot learn Morning Sun at all, and knows Moonlight from its pre-evolution, Gloom. It is capable of learning Synthesis through breeding. Bellossom can also be considered as the female counterpart to Vileplume although male Bellossom also exist.

Bellossom is unusual as it is the only Pokémon that completely loses a type when it evolves. It is a pure Grass type Pokémon, while it was Grass/Poison when it was Gloom. The Poison type does not get replaced with another type, as with other Pokémon - it just disappears.

It is also one of the very few Pokémon that actually shrinks in size instead of growing in size like other Pokémon; going from a 2'07 Gloom to a dimunitive 1'04, it's even smaller than its first form, Oddish. The only other two Pokémon to do this as it evolves are Porygon as it evolves into Porygon2 and Haunter as it evolves into Gengar. This also happens with Dragonair evolving into Dragonite, but in that case, it changes from a serpent into a bulky dragon, and only the length is reduced.

Bellosom has exactly the same statistics as Vileplume, except that its Special Attack and Special Defense statistics are switched around. This could make it slightly less desirable for those who prefer high attack statistics over defense.

It is also carried by a Lass in Pokémon Puzzle Challenge who gives it to you if you defeat her. Bellossom is the toughest Pokemon to get, due to having to finish a Gym Battle in 25 seconds or less, before Clair.

In the Nintendo Gamecube game Super Smash Bros. Melee, Bellossom appears randomly when a Poké Ball is thrown. Once released, it hovers in place and uses the Sleep Powder technique it inherited from its unevolved form Gloom to temporarily put opponents to sleep. Unlike in the Pokémon video games, it is possible to wake a sleeping character by attacking it, but unless the attack does significant knockback, the attacked character will fall right back into Bellossom's sleeping powder. Bellossom is also available as a trophy.

Prior to being available in the games, a trio of Bellossom appeared in the short Pikachu's Rescue Adventure, which came on before Pokémon 2000. They have apparently known Ash's Pikachu since it was wild.

Bellossom is also notable in that it is one of only a few pokémon to have had a song named after it. For the movie Pokémon 2000, the song Dance of the Bellossom was composed in the style of music that Bellossom create.

As early as Volume 12 of Pokémon Special, Erika owns a group of Bellossom who presumably help her in flower arrangement. 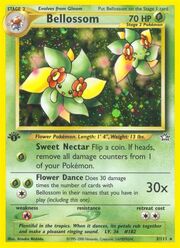 Bellossom has had less appearances in the Pokémon Trading Card Game than its alternate Gloom evolution, Vileplume. Bellossom appears in the