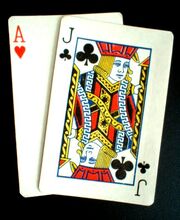 Also known as 21 or Pontoon. Not to be confused with Black Jack. Blackjack is one of the most popular, and quickest to learn casino games in existence. The game is played with a standard 52 card deck, jokers removed. Depending on location, anywhere from one to six decks may comprise a 'shoe'.

Object of the game[edit | edit source]

The object of the game is simple. To beat the dealer by having a higher point total then the dealer, to be still in the hand when the Dealer 'busts' (see below), or to be dealt a Blackjack, which is a starting hand of an Ace and any Ten-card (Tens, Jacks, Queens, Kings).

How to Play[edit | edit source]

The game begins with the player putting up their bet. Tables can sustain a maximum of 7 players. A hand begins with the Dealer delivering one card face up to each player, starting on his left, and then one face down card to himself. The Dealer then delivers a second card to all players, and then a second face down card to himself. The first card of the Dealer is then turned face up, and placed on top of the other face-down, or 'hole', card. The Dealer will then check all hands for Blackjack. If a player has Blackjack, they are paid 3:2 on their bet. If Dealer has Blackjack, all players (save those with a Blackjack) lose, and their bet is collected by the Dealer.

If Dealer does not have Blackjack, players may attempt to improve their hands by taking a 'hit' of another card, starting from the player on the Dealer's left. A card counts for the number on it, with Jacks, Queens, and Kings counting for 10. Aces are variable, worth either 1 or 11. The goal is to get as close to 21 as possible without going over. If a player takes a hit, and their hand total is 22 or more, they have 'busted', and they lose their bet. When a player wishes to take no more cards, they 'Stand', and play passes to the next player to the right.

Players may also make increases in their bets under certain conditions. The first type of bet increase can be made on any hand. It is known as 'Doubling Down'. The player may make an additional bet of up to the amount of their original wager. In exchange, they receive one new card, and their turn is over. Doubling Down can be done on any two cards. The second is known as 'Splitting.' If a player is dealt a pair (two cards with the same value, i.e. two 8s), they may 'Split' that pair into two new hands. This is done by making a second wager equal in value to the original bet. The pair is then separated by the dealer, and one card delivered to the first new hand. The player will play out that hand until he stands or busts, and then a second card is delivered to the second hand, and the process is repeated. If another pair is formed on either hand, they can be split again. The normal maximum for splitting is four hands from the one original hand.

After all players either stand or bust, the Dealer reveals his hole card. If the Dealer's hand totals 16 or less, he must hit. If his hand totals 17 or higher, he must stand, and his hand is compared to the remaining player hands. If the Dealer has the higher total, the Dealer wins, and that player loses his bet. If the player has a higher total, the player wins, and they are paid 1:1 on their wager. If both hands are equal, it is a 'Push', and no money is taken or paid. If the Dealer is forced to draw, and he busts, then all hands that have not busted are paid 1:1.

There is one final bet that may be placed on a Blackjack game. When the Dealer flips his first card after dealing out the hand, if an Ace is revealed the players may make an Insurance bet. This is a bet of up to one-half the original bet. The Dealer then checks the hole card, and if it is a Ten-card (10, Jack, Queen, King), the Dealer reveals the Blackjack, and collects all losing bets. Any insurance bets are then paid at 2:1.