Difference between revisions of "Bowser Jr."

Bowser Jr. is the most recent offspring of the big turtle himself King Bowser Koopa. The young Koopa kid first appeared in Super Mario Sunshine in 2002.

Bowser Jr. began his career as an evildoer on the tropical land of Isle Delfino. Here little Bowser stirred up trouble by painting the town gooey. He was able to do this through the use of the Gaddbrush, a magical brush given to him by Professor Elvin Gadd. With this brush Bowser Jr. could make all his wishes come true. To the dismay of Mario this meant not only spreading graffiti and all types of nastiness around Isle Delfino, but also capturing Princess Peach or as Bowser Jr. likes to refer to her as... mommy.

That's right this messed up prepubescent koopa believes that the lovely airheaded princess of The Mushroom Kingdom got it on with his old man, the giant King Bowser Koopa...

The last boss Mario must face in Super Mario Sunshine is indeed Bowser Junior. However, Mario must also face off against Bowser Junior's ferocious father. In a jacuzzi above Corona Volcano is where the epic battle takes place. Mario of course wins and all is well. The ending scenes show Bowser Jr. having a heart to heart with his beloved father. It seems that he new all along Princess Peach wasn't his mother he just needed that extra something that only a mommy can provide.

Strangely nothing is said about the other Koopa Kids that appear in previous Mario games. If this isn't Bowser's first child then it seems pretty odd that he waited till this one to name one of them Bowser Jr.. It should be noted, however, that at the beginning of Super Mario Sunshine FLUDD scans Mario and apparently shows him fighting Larry Koopa, one of the previous Koopa children. So perhaps almighty gods at Nintendo are not shoving the other Koopas out of the spotlight the primary Mario platformers provide.

Bowser Junior, unlike his siblings, does not appear in Mario and Luigi: Superstar Saga. Therefore, many theories argue that he is merely a younger version of Ludwig, who remains unnamed so that he would not seem like a "favored" Koopaling. 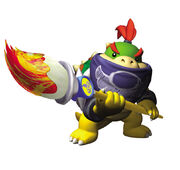 Bowser makes an appearance in Mario Kart: Double Dash!! racing with his dear old dad. His racecar is known as the Bullet Blaster and his special weapon in this game is the Bowser Shell. He also appears (with mask on) in Mario Golf: Toadstool Tour and in Mario Power Tennis. He brings along the Gaddbrush to the tennis court to allow him to decimate the competition. His latest appearance is in New Super Mario Bros. Wii for the Wii.