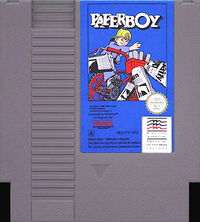 A cartridge is a form of storage media, with a plastic shell that houses a circuit board; this circuit board has a connector that plugs into a port on the console that is capable of reading the information stored on a ROM chip on the circuit board. This was the common medium for games used by the NES, Super Nintendo Entertainment System, Nintendo 64, Atari 2600, and Genesis, among many other consoles and even home computers. Some modern handheld consoles such as the Game Boy and Game Boy Advance use cartridges, though the Nintendo DS uses Flash ROM cards instead. Some educational-based game systems like the Leapster and the V-Smile also use cartridges.

The plastic housing contains ROM cells on which the content is stored. This tended to increase the production cost, as solid-state memory was expensive to manufacture.