Castle Wolfenstein is a stealth-based computer game, the first in the genre, developed by Muse Software for the Apple II. It was first released in 1981 and later ported to DOS, the Atari 8-bit family and the Commodore 64.

Castle Wolfenstein is a stealth game set in World War II. The game's main objective is to traverse the levels of the castle to find the secret war plans and escape alive. Progressively higher military ranks are earned upon each successful escape with the war plans, and the game becomes correspondingly more difficult as each higher rank is achieved. There are 8 ranks, beginning with Private, culminating at the rank of Field Marshall.

The game is played from a top-down perspective, though the characters are seen upright like in a side-scroller. The player traverses the levels by sneaking past guards, impersonating Nazi soldiers and sometimes even killing opponents. Castle Wolfenstein can be controlled with a joystick, paddle, or a keyboard. 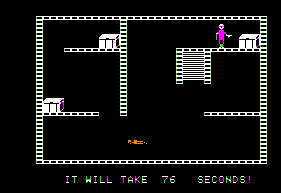 The emphasis on espionage can be seen here in the Apple II version of the game as the player attempts to pick the lock on a chest in the castle. A dispatched Nazi guard's body can be seen near the middle bottom of the screen.

Upon starting the game, the player is equipped with a gun and bullets, which were taken from a dead cellmate. Once the player starts moving, he attracts the attention of the guards, who will try to shoot or apprehend him. He must either run from the guards, or kill them. 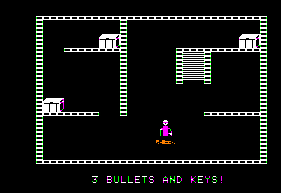 Unlike most games of the era, not only did the player have to kill and defeat enemies, he also needed to search their bodies for possibly useful items. Here a player can be seen searching a guard's body in the Apple II version of the game.

There are two styles of guards, the basic guards, and the SS Stormtroopers who wear bullet-proof vests marked with the SS insignia. The basic guards are not very intelligent, reacting only to the sounds of gunshots and grenades, or after seeing the player wandering around without a uniform. Additionally, they are unable to leave the rooms they are stationed in. The SS guards are much smarter and once alerted, tend to chase the player from room to room. They require a large number of bullets or a grenade to kill.

The player has two means of killing enemies. The first is to shoot the enemy, but this expends bullets, a scarce commodity, and risks raising the alarm if another guard is present. Alternatively, a grenade can be used, though this will also attract the attention of nearby guards. Once an enemy soldier is dispatched, his body can be searched for bullets, keys, grenades and bullet-proof vests.

An alternative to the player shooting his way out of the castle is to find a uniform (either in a chest or from a dead guard), at which point the normal guards will think the player is one of them. However, the SS guards will usually expose the player as an impostor.

Guards do not always have to be killed. Pulling a gun on a guard usually will cause him to put his hands up, allowing him to be frisked for ammo, bullet-proof vests, grenades, and keys. The player can still choose to kill the guard at this point, but it is not strictly necessary.

Some rooms contain locked chests that can be picked and searched. Some are empty, but others contain useful items such as bullets, grenades, uniforms, bullet-proof vests and the war plans. Chests can also contain bratwurst, Liebfraumilch wine, Schnapps, Eva Braun's Diaries, cannonballs, and medals, though all are worthless in terms of gameplay. Edible items, when ingested, result in comments on their flavor. After drinking an alcoholic beverage, a message of "Hic!" is displayed on screen and the player's aim is temporarily thrown off balance, resulting in bullets and grenades missing their target.

There are a total of 60 discrete rooms in the castle, on five separate floors. Although the rooms are shuffled at the beginning of each game, the path through the castle always remains unchanged. Therefore, it is possible to fully map the castle, and then utilize the map during subsequent games. 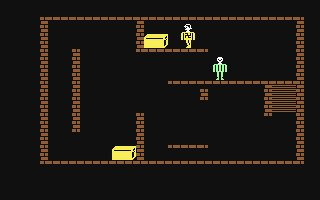 The Commodore 64 version of the game (released in 1983) featured improved graphics over the original Apple II version.

One of the main drawing points for fans was its unprecedented use of digitized voices. German words shouted by the guards, such as "Halt!" (stop!) and "Kommen Sie!" (come, you!) were frequent. Though hard to understand, the voices added to the game's atmosphere and made Castle Wolfenstein stand out from other games released at the time.

With an emphasis on trying to avoid detection for as long as possible, Castle Wolfenstein and its sequel are considered by gamers to be prototypical stealth-based game the first in a genre that wouldn't gain popularity until the late 1990s. The game was favorably reviewed by Creative Computing, one of the leading computer magazines at the time.

The disks save the player's progress as they enter each room; because they are continually being used, the disks cannot be write protected. This allows players to cheat by opening the drive door before the game can write the death status to disk; one can simply reload the game as if he or she had just entered the room.

In the Apple II version, the player could hold down the spacebar while picking a locked chest resulting in a faster unlocking of the chest.

Castle Wolfenstein was written by Silas Warner (1949, 2004). He was one of the original employees of Muse. In addition to developing Castle Wolfenstein, he wrote the sound engine (called "The Voice") and the game engine.

Original artwork for the box was created by John D. Benson.

Castle Wolfenstein inspired the game Wolfenstein 3D by id Software, which was released in 1992 and helped popularize the first-person shooter genre. Some fans of the original game now call it "Wolfenstein 2D" to differentiate it from id's game.