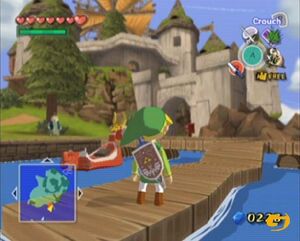 An example of cel-shading from The Legend of Zelda: The Wind Waker

Cel-shaded animation or cel-shading is a type of non-photorealistic rendering designed to make computer graphics appear to be hand-drawn. Cel-shading is often used to mimic the style of a comic book or cartoon. It is a relatively recent addition to computer graphics, most commonly turning up in console video games. Though the end result of cel-shading has a very simplistic feel like that of hand-drawn animation, the process is complex.

The cel-shading process starts with typical 3D model. The difference occurs when a cel-shaded object is drawn on-screen. The rendering engine only selects a few shades of each color for the object, producing a flat look. This is not the same as using only a few shades of texture for an object, as lighting and other environmental factors would come into play and ruin the effect. Therefore, cel-shading is often implemented as an additional rendering pass after all other rendering operations are completed.

In order to draw black ink lines outlining an object's contours, the back-face culling is inverted to draw back-faced triangles with black-coloured vertices. The vertices must be drawn multiple times with a slight change in translation to make the lines "thick". This produces a black-shaded silhouette. The back-face culling is then set back to normal to draw the shading and optional textures of the object. Finally, the image is composited via Z-buffering, as the back-faces always lie deeper in the scene than the front-faces. The result is that the object is drawn with a black outline, and even contours that reside inside the object's surface in screen space.

Some of the prominent games and films that have featured cel-shading graphics include: