Chikorita (チコリータ, Chikorīta, Chicorita in original Japanese language versions) are one of the fictional species of Pokémon creatures from the multi-billion-dollar Pokémon media franchise – a collection of video games, anime, manga, books, trading cards and other media created by Satoshi Tajiri.

The name Chikorita may be a portmanteau of the words, chicory, an herb, and the suffix "-ita" denoting its small size. Like Bulbasaur, Chikorita is reptilian in appearance, but it has a large leaf sprouting from its head, a collar of seeds around its neck, and a short tail. The name "Chikorita" refers to the species as a whole, as well as individual specimens in the games, anime and manga. Unlike Bulbasaur, who is part poison-type, Chikorita is a pure grass-type.

Chikorita, by nature, are docile Pokémon that love to soak up the sun's rays. This can be attributed to the benefits of the photosynthesis process that occurs when the rays of the sun impact the Pokémon's leaf, and its body. The leaf serves multiple purposes; in its natural environment, its leaf detects the density of humidity and temperature in the atmosphere to help it seek warm places. The pleasant aroma that wafts from the leaf can be used by Chikorita in battle by waving it around to becalm the foe and keep it at bay.

Chikorita features high defenses both physical and special. Its speed isn't the best, bit it still has decent attack, special attack, and lots of HP. Chikorita isn't effective against the first gym leader, because it won't do well on flying types. It is also hard to use on Bugsy's bugs as well. It might come in handy in against Pryce's Ice types because some are water types too, but it will suffer from the ice moves. Chikorita's use comes later in the game when it learns Razor Leaf and Body Slam. It also works well when you reach Kanto and consider challenging those gyms.

One of the things consistent among most of the Pokémon games–spanning from Pokémon Red and Blue on the Nintendo Game Boy to the Nintendo DS games, Pokémon Diamond and Pearl–is the choice of three different Pokémon, labelled the "Starter Pokémon", with which the player may begin the adventure. Players can choose a Water-type, a Fire-type, or a Grass-type Pokémon indigenous to the region. An exception to this rule is Pokémon Yellow (a remake of the original games that follows the story of the Pokémon anime), where players are given a Pikachu — an Electric-type mouse famous for being the mascot of the Pokémon franchise.[1]

Chikorita is the Grass-type Starter Pokémon in Pokémon Gold, Silver and Crystal.[2] In Pokémon Emerald, Professor Birch allows the player to choose between Cyndaquil, Totodile or Chikorita after completing the Hoenn Pokédex.

Chikorita can also be obtained from Pokémon XD: Gale of Darkness, in which one can be won by completing the Mt. Battle challenge.[3] Chikorita obtained in this way know Frenzy Plant,[4] a powerful Grass-type attack, normally exclusive to the final evolutions of all grass starter types as a tutor move.[5] Chikorita is also available as a Starter or Partner Pokémon in either Pokémon Mystery Dungeon: Red Rescue Team, or Blue Rescue Team.[6] Chikorita may also appear in Joyous Tower or as the player's partner in Pokémon Mystery Dungeon.

In the Nintendo GameCube game Super Smash Bros. Melee, Chikorita often appears from a Poké Ball. It fires a horizontal row of razor leaf attack in the direction of the nearest enemy. It is also available as a trophy. It will also appear in Super Smash Bros. Brawl.

In the Pokémon anime, Ash Ketchum caught a Chikorita early on his adventure through Johto, after saving it from a sudden snowstorm. Chikorita is very affectionate, and often sees Pikachu as a rival for its affections. In the episode "Current Events", Chikorita evolves into a Bayleef when Ash was almost in mortal peril. This Chikorita is very stubborn and also very powerful.

Casey and Jackson are also trainers that have had Chikorita. For Jackson, he has mentioned that he once had a Chikorita, but it has since evolved into a Meganium. Casey's Chikorita, like Casey herself, is very fond of the Electabuzz baseball team. It was the healing of a rift in the relationship between Casey and Chikorita (in which Casey was effectively running Chikorita to the point of exhaustion in a bug-catching contest) in which Chikorita evolved to Bayleef. It would later evolve into a Meganium in Casey's last known appearance in Pocket Monsters.

A Chikorita has also appeared in the Pokémon Chronicles episode "The Search for the Legend". This Chikorita was owned by a man named Silver.

Chikorita is one of the members of Team Go-Getters in the half-hour animated special "Pokémon Mystery Dungeon: Team Go-Getters Out Of The Gate!". Not only is she light-hearted, but she is also very defensive of her friends.

In Pokémon Special, when Crystal is sent to catch Pokémon for Professor Oak, Professor Elm's Chikorita escapes from the lab and follows her, wanting desperately to go on a journey. Crystal refused to allow it to be a part of her party unless it could stand up to her own Pokémon in a battle. It managed to survive the Mega Punch attack of Crystal's high-level Hitmonchan, and so she gave Chikorita the nickname Megapyon. 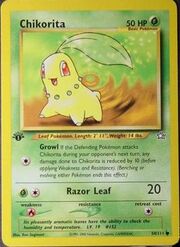 The Pokémon Trading Card Game is a collectible card game similar in goal to a Pokémon battle in the video game series; players must use cards (with individual strengths and weaknesses) in an attempt to defeat their opponent by "knocking out" all of his cards.[7] The game was first published in North America by Wizards of the Coast in 1999, until Nintendo USA started publishing the series in 2003.[8]