Chrono Trigger is an SNES RPG developed by Square, now known as Square Enix. Released in 1995, Chrono Trigger had a large impact on the RPG genre and is generally considered one of the best RPGs of all time thanks to its fun & unique turn based battle system, intricate storyline, brilliant music and memorable cast of characters.[citation needed] The characters were designed by famous artist Akira Toriyama.

A sequel, Chrono Cross, was also released for the PlayStation in 2000. Despite being considered one of the top franchises in Square-Enix's profile, ranking among the Final Fantasy and Dragon Quest video games, not much has been heard of a third installment, other than a few trademarked names.

Chrono Trigger revolves around the adventures of Crono from Guardia Village in the year 1000 CE, as well as his friends from his own time, and others that he meets on his travels. The game starts off light-hearted and peaceful, but soon the party finds that the world they live in will meet its destruction in the future.

When Crono, the main character, leaves for the Millenium Fair, his life is turned upside down. At the fair, he meets up with a young girl named Marle, who turns out to be Princess Nadia of the Royal Family. Crono's friend Lucca demonstrates her latest marvelous invention, an instaneous transportation device! Marle's pendant interferes with the invention and catapults her into the past. The only person who can save Marle is Crono. In a fit of heroism, he too is flung into the past, which begins an adventure into time travel. 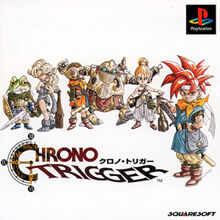