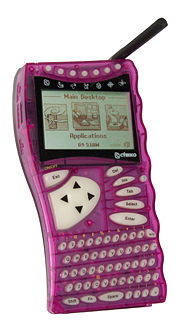 Cybiko was a hand held computer designed for teenagers featuring its own two-way radio text messaging system. It had over 430 "official" freeware games and applications. Because of the text messaging system, it features a QWERTY Keyboard that was used with a stylus. An MP3 player add-on was made for the unit as well as a SmartMedia card reader. The company stopped manufacturing the units after two product versions and only a few years on the market, but because of the unique radio messaging hardware there is still a hobbyist community using Cybiko.

The MP3 player for the Classic plugs into the bottom of the Cybiko, it used Smart Media cards, with a maximum size of 64mb. The player had built in controls. These are relatively easy to find.

The memory expansion card plugs in the back of the Cybiko. It provides 1 megabyte of static RAM memory and 1 megabyte of data flash memory. The RAM allows programs with larger memory requirements to run. The data flash allows more programs to be stored. Some Cybiko programs will not run unless the Expansion Memory is plugged in.