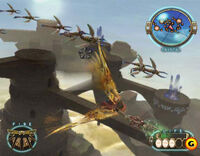 What could have been.

Dead Phoenix is the name of a third-person shooter by Capcom that was slated to be released on the Nintendo GameCube, but was later cancelled. It was also one of the games in the so-called Capcom Five, a group of promised GameCube exclusives that didn't pan out.

The game took place in an angelic fantasy setting, putting players in the role of some kind of angel, shooting various types of beams in a free roaming environment. The only gameplay video released shows crowds of enemies, both airborne and on the ground, and a variety of different weapons, including a big claw-like weapon. Near the end of the video, the angel character turns into a dragon.

The game showed some similarity to the all-range mode in Star Fox games, and was said to convey "freedom of flight in a large world." It was announced as cancelled on August 23, 2003. 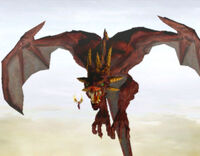 After it was announced that the game was cancelled, many speculated that Nintendo would take the game into the fold, and re-tool it as a Kid Icarus sequel. However, nothing ever came of this. It is likely this rumor started due to the similar Angel setting. The gameplay and tone are vastly different in both levels. To this day, Dead Phoenix is still a dead concept, and will likely never be revived.