Demon's Souls (デモンズソウル, Demonzu Souru?) is a fantasy action RPG developed by From Software for the PlayStation 3. With a dark fantasy theme, the game was described as a spiritual successor to the King's Field games.[1] Demon's Souls won GameSpot's 2009 Game of the Year award.[2]

Demon's Souls (デモンズソウル, Demonzu Souru?) is an action role-playing video game developed primarily by From Software with assistance from SCE Japan Studio exclusively for the PlayStation 3. It was released in Japan on February 5, 2009 and published by Sony Computer Entertainment. In North America the game was released on October 6, 2009 and published by Atlus; Namco Bandai Games published the game for Australia and Europe on June 23 and June 25, 2010, respectively.

Set in a dark fantasy world, players take control of a hero who has journeyed to the fictional kingdom of Boletaria, which is being ravaged by a cursed fog that brings forth demons who feast on the souls of mortals. The game has been described as a spiritual successor to the King's Field series of games. The gameplay involves a character-creation system and emphasizes gathering loot through combat with enemies in a non-linear series of varied locations. It has a unique online multiplayer system integrated into the single-player where players can leave useful messages and warnings for other players' single-player game worlds, as well as joining other players in their world to assist and/or kill them.

Upon its release in Japan and North America, Demon's Souls was met with acclaim from critics, winning numerous awards. The game was praised for its dark fantasy art design, variation in combat choice and integrated online interactions. The game is particularly notable for its high difficulty level, with many critics noting it as a genuine challenge. The game has a spiritual successor titled Dark Souls.

Players can customize their own characters, setting the name, gender, hair style and other characteristics. Players face off against a variety of beasts and demons, making use of a variety of different weapons. There are several forms of magic that can be used in a defensive manner. After a player is killed, they become a Soul, and continue playing, though with less health. After defeating a particular demon or using a particular item, the player is restored to life. Souls are collected through collecting the souls of dead soldiers and heroes, as well as siphoning energy from enemies killed in combat. These Soul Points can be exchanged for equipment or to improve player stats.

The player confronting a red dragon. The light tint around the player character indicates that they have previously died resulting in a cut health bar and stronger foes.

The hub world that takes place between missions is the Nexus, a small area where the player can interact with NPCs, shop, and store equipment. The actual game world is divided into five stages, accessible via portals. The first is Boletaria Palace, the ruins of the castle where Boletaria's ruler once lived. Second is the Stonefang Tunnel, a mine that was corrupted and overrun by goblin-like creatures. Third is the Tower of Latria, a dark, abandoned prison tower. Next is the Shrine of Storms, a cliff-side ruin infested by the undead and besieged by flying creatures known as Storm Beasts. Last is the Valley of Defilement, a deep gorge in the earth full of poisonous leeches, trolls, and sheer drops.

The game includes integrated online features. Players can find messages on the ground containing hints and advice that other players have left, as well as bloodstains where other players have died which allow them to view how those players' deaths occurred. Ghosts of other players currently in the same stage also appear randomly, though no interaction takes place. Co-operative play allows three players to team up and play through different levels in the game through Soul Links, until a demon is defeated, when the Soul returns to life. In competitive play, a player who is a Soul can force themselves into another player's adventure, where they're known as Black Phantoms, and play against their opponent. If the Black Phantom kills the other player, the Phantom is returned to life in their own game. If the Black Phantom is defeated, a portion of the invading player's souls is transferred to the victor.

The game surrounds the search for power and prosperity of King Allant XII who channeled the power of souls. He brought unprecedented prosperity to his northern kingdom of Boletaria. That is, until a thick and colorless fog covered the land's outskirts, cutting off the kingdom from the outside world. Those who entered the fog never returned. Vallarfax of the royal Twin Fangs broke free from the fog and told the world of Boletaria's plight. The aging King Allant XII had awakened the Old One, the great beast below the Nexus, from its eternal slumber and that a dark fog had swept in, unleashing soul-craving demons. The ones that lost their souls also lost their minds. Chaos reigned, the mad attacking the sane. The Demons grow stronger and more powerful with each soul they devour. The legend was told from man to man; mighty warriors entered the cursed lands, but none have returned.

SCEJ producer Takeshi Kajii described the game to Famitsu as a spiritual successor to King's Field. "I am a fan of From Software, but naturally that also means there are parts of their games I'm not satisfied with, too," he said. "If this was a new King's Field game, there would be areas we wouldn't be able to touch since they're part of the series; working together like this, we can try to make something really new."[3] 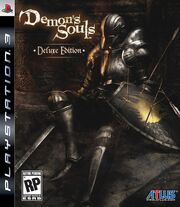 Merchandise and other media[edit | edit source]

In North America there are two versions of the game. The Deluxe edition costs $10 more and includes a 160-page guide book along with a slipcase that will house both the game and guidebook. This edition is only available to North American residents, although pre-ordering either version will net gamers an art book.[10] According to the Atlus Faithful newsletter, the game will also include a bundled soundtrack for both versions.[11]

The game was received fairly well by Japanese media and gamers. Dengeki scored the game 95/85/85/85, Famitsu gave it a more mixed review with the scores 9/7/7/6. The game sold 39,966 copies in its first week in Japan,[20][21] and also reportedly boosted PS3 sales in the region.[22] It has sold 134.585 copies in Japan as of December 2009.[23] In North America, Demon's Souls debuted at the eleventh place of the October 2009 charts according to NPD, with over 150,000 copies sold.[24] Famitsu reviewer Paint Yamamoto, rated the game 9: "This is a game you learn how to play by losing -- you'll face sudden death frequently. But! Keep playing... and you'll realize how deep it really is. If you're looking to experience rich RPG elements, by all means play Demon's Souls!!."

Famitsu "casual" reviewer Maria Kichiji rated the game 6 "It's super-difficult... 'Souls' are needed for everything from shopping to power ups, and the entire game is unforgiving. Even worse, there are almost no hints. Demon's Souls is far too stoic... it's not a game for everybody."[25]

Reviews from Western critics have been very favorable. Edge and Eurogamer gave the game a 9/10 score, and reviewer Keza MacDonald wrote "It's stoic, uncompromising, difficult to get to know, but also deep, intriguingly disturbed and perversely rewarding. You can learn to love Demon's Souls like few other games in the world. But only if you're prepared to give yourself over to it.".[26] RPGFan gave Demon's Souls 86%,[18] and PixelVerdict gave it 5/5.[27] PixlBit offered one of the lowest reviews, 3/5 stars, stating it can be "a magnificent, engaging experience [for players] who can tolerate high difficulty ... however, the average player will be overwhelmed with the challenge, or completely put-off by the repetition."[28] ScrewAttack named it the eighth best PS3 exclusive.[29] GameSpot and GameTrailers both gave Demon's Souls the title of RPG Game of the Year.[30][31] GameTrailers also gave it the "Best New IP of 2009",[32] award and GameSpot awarded it as both Best PS3 Game and Game of the Year.[33][34]

In 2011, CD Projekt cited Demon's Souls as an influence on The Witcher 2: Assassins of Kings. [4]