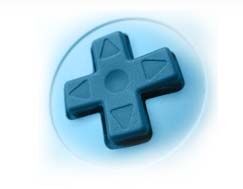 D-Pad, the cross shaped directional input pad used on most video game console controllers since its introduction in the Game & Watch series of portable games, starting with Donkey Kong. The D-Pad was invented by Gunpei Yokoi. It was later popularized worldwide by the Nintendo Entertainment System. The design was patented and later earned a Technology & Engineering Emmy Award.[1][2]

The "D" stands for Directional, as the primary function of the D-Pad is to navigate menus or move an avatar around the screen. Though it was originally made to point in four directions, later versions developed by succeeding companies allowed it to be pointed in eight directions, by using the thumb to press two buttons together to move diagonally.