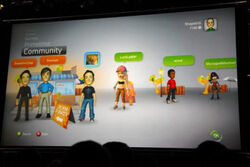 On the first day of the convention, Microsoft held their press conference.

The Conference opened with a demonstration of the newest Fallout game, Fallout 3. It was announced that Resident Evil 5 would have online co-op and would release world-wide on March 13, 2009. A look at Fable 2 and Gears of War 2 was then given.

Microsoft then showed off a new dashboard interface that included Mii-esque avatars. These avatars would be available in the future to use in Xbox live and through certain games. A new mode called Primetime will allow for interactivity with primetime televised game shows like 1 vs 100.

The game Portal: Still Alive was announced as an exclusive for the 360.

A partnership with the internet movie rental service, Netflix, was announced. This will allow you to watch movies through your Xbox 360.

Lips, a karaoke game was announced and said to have Zune and iPod compatibility so you can sing along to your own music. Along with the announcement a short demo was shown. This demo involved singer-song writer, Duffy, crooning her lovely tune and the crowd begged for mercy.

Finally, Microsoft saved what was arguably the biggest news for last announcing that FFXIII was going to be coming to the 360 as a multi-platform title.

Nintendo's press conference took place July 15, the second day of E3. It was held at the Kodak Theater in Hollywood and Satoru Iwata, Shigeru Miyamoto, Reggie Fils-Aime, and Cammie Dunaway all made appearances.

A demonstration of a snowboard game using Wii balance board was presented by olympic medal winner Shaun White.

It was confirmed that the Zelda and Mario teams were both working on new projects.

Reggie Fils-Aime then takes over and talks about the success of the Wii. He says expectations are that the Wii will be shown to have taken first place in console sales figures away from Microsoft's Xbox 360 when NPD releases its June sales numbers.

Three games were then previewed quickly, a new Star Wars game, another sequel to Raving Rabbids, and Call of Duty 5: World at War.

Cammie Dunaway announced a new game in the Grand Theft Auto series would debut for the Nintendo DS. The game titled Grand Theft Auto: Chinatown Wars, will be set in Liberty City and star a new character.

Shigeru Miyamoto took to the stage and showed Wii Music, a non-game which should allow anyone to pick up and play over 50 musical instruments using the Wii remote. Shigeru Miyamoto continued on talking about all the wonder that is Wii Music. Recording performances, teaching how to play instruments, and other fun stuff.

Resistance 2 was demoed by Ted Price.

It was announced that games that were hits on the PlayStation 2, such as the first Resistance, COD3, and Ninja Gaiden, will be brought over to the PlayStation 3 with a retail price of $29.99. Little Big Planet was shown and will release in October.

A bundle including the seemingly immortal PlayStation 2, Lego: Batman and the movie Justice League: New Frontier would be available at retail for $149.

It later announced that the PlayStation Network will, in the future, move to a single sign-in for all PlayStation services. Tretton then moves on to the Sony Home service. A video of Home was shown featuring all you can do in the virtual space. The PlayStation Store will allow gamers to rent and buy movies.

Resistance: Retribution, another new game in the Resistance series, was announced for the PSP.

A new evolution of the PS3 hardware will release in the Fall. This PS3 will retail for the same price as the 40GB PS3, but will instead include an 80GB hard drive. Finally the conference ends with a trailer for the next console God of War game.