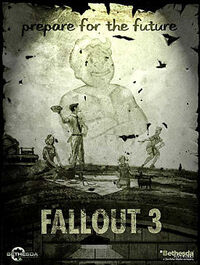 The Vault-tec Assisted Targeting System, or V.A.T.S., will play an important part in the fighting phases of the game. While using V.A.T.S., real-time combat is paused creating a combat system that the Bethesda developers have described as a hybrid between turn-based and real-time combat. V.A.T.S. will also allow the gory deaths in the game to be shown in slow motion and great detail. Various actions cost action points, limiting the actions of each combatant during a turn, and both the player and enemies can target specific body areas for attacks to inflict specific injuries. The game will feature a new health and radiation system as well. The player can measure an object's radioactivity and gauge the effect it will have on the character.

Another unique facet of gameplay is that firearms wear out after time: as a weapon degenerates, its rate of fire slows and it loses accuracy. However, worn out firearms can be combined to make more reliable and powerful weapons. Weapon schematics can also be found and used to create various devices such as rocket launchers or the clever shrapnel bomb, made out of a Vault-Tec lunchbox and bottlecaps. Along with equipping various weapons, the player can also utilize different armors and clothing that may have effects that can alter various skills. For example, a pair of mechanic's coveralls may boost the player's repair skill while it is worn. Armor and clothing come in two main parts for the head and body, allowing a player to wear different combinations of hats and armor. Also, a player's inventory has a specified weight limit, preventing a player from carrying too many items. Items like weapon ammo have no weight, due to the developer not wishing to bog down inventory management. The player will have a maximum party of three, consisting of himself/herself, Dogmeat, and a single NPC. In addition to having Dogmeat in your party you will be able to send him out on his own to search for items such as arms and ammo, radiation medicine, and stimpacks. Dogmeat can be killed during the game if the player misuses him or places him in a severely dangerous situation and he cannot be replaced. Only one NPC can travel with the player at any time, and in order to get another NPC to travel, the first one must be "fired" by the player.

A karma system will be an important feature in the gameplay. A player's actions, including conversation and combat choices, will affect the player's status in the game world; a player who makes good choices will be received more positively by NPCs, and a player that makes bad choices will have the opposite reaction. Crimes can also be committed by a player, and whichever faction or group that is harmed by a crime will be fully aware of the player's action. Other factions that were not affected by the crime will not be aware of it, and since a town is usually its own faction, news of a crime committed in one town will not spread to another; factions can range in size and boundaries, however, and my not be restricted to a single area.

Similar to previous Fallout games, Fallout 3 takes place in post-apocalyptic United States. The player character is a member of Vault 101, a fallout shelter serving Washington, D.C. The player character lives with his father (his mother having died in childbirth) until, one day, the player wakes up finding that his father has left the vault and ventured into the wasteland for unknown reasons. The vault overseer becomes suspicious that the player had something to do with the father's disappearance, and the character decides to go out into the Capital Wasteland in search of him.

During a March 21, 2008 Official Xbox Magazine podcast interview, Todd Howard revealed that the game had expanded to nearly the same scope as Oblivion. There were originally over 500 versions of the final cutscene, but due to recent upgrades, this expanded to nearly 10,000 possible permutations, all of which are determined by the actions taken by the player.

Fallout 3 was initially under development by Black Isle Studios, a studio owned by Interplay Entertainment, under the working title Van Buren. Interplay Entertainment went bankrupt and closed down Black Isle Studios before the game could be completed, and the license to develop Fallout 3 was sold for a $1,175,000 minimum guaranteed advance against royalties to Bethesda Softworks, a studio primarily known as the developer of the The Elder Scrolls series. Bethesda's Fallout 3 however, was developed from scratch, using neither Van Buren code, nor any other materials created by Black Isle Studios. In May 2007, a playable technology demo of the cancelled project was released to the public.

Leonard Boyarsky, art director of the original Fallout, when asked about Interplay Entertainment's sale of the rights to Bethesda Softworks, said that he felt as though "our ex wife had sold our children that she had legal custody of."

Every game has its share of glitches and bugs and Fallout 3 is no exception.

scrap metal such as Walter in Megaton and trade scrap metal an infinite amount of times. Doing this, you can level up from 1 to 20 (or 30 with Broken Steel) in about thirty minutes from Walter in megaton. Walter can be found in the Water Treatment Plant. The more scrap metal you use in this glitch the higher turn in options you will have with Walter. IF Casdin keeps attacking you when you get caught at the end of the glitch then make sure you have good karma, if he still attacks you then its rumored to be because you have killed an outcast member, in this case you cant ever do the glitch on that character, there can also be other things that prevent it that's unknown but if you wanna be sure to succeed then make a completely fresh out of the vault character and gather minimum 6 scrap metal and head there directly. This glitch should work with all things you can turn in, if you successfully do it with APC then you wont be able to use the infinite amount in your gun, but you can give him an infinite amount and then steal the duplicates back (remember the difficulty of pickpocketing Casdin, however). Retrieved from ""

Bethesda Softworks stated it would be working on Fallout 3 in July 2004, but principal development did not begin until after The Elder Scrolls IV: Oblivion was completed. Bethesda Softworks has announced their intention to make Fallout 3 similar to the previous two games, focusing on non-linear gameplay, a good story, and black comedy. Bethesda has also stated the game will be rated M for mature, and will have the same sort of adult themes, violence, and depravity that are characteristic of the Fallout series. They have also decided to shy away from the self-referential gags of the game's predecessors that broke the illusion that the world of Fallout is real. Fallout 3 will use a version of the same Gamebryo engine as The Elder Scrolls IV: Oblivion, and is being developed by the team responsible for that game. Liam Neeson has been attached to the project as the voice of the player's father.

In February 2007, Bethesda stated that the game was "a fairly good ways away" from release, but that detailed information and previews would be available later in the year. Following a statement made by Pete Hines that the team wanted to make the game a "multiple platform title," the game was announced by Game Informer to be in development for Windows, Xbox 360 and PlayStation 3. A teaser site for the game appeared on May 2, 2007, featuring music from the game and concept art, along with a timer counting down to June 5, 2007. The concept art was commissioned before The Elder Scrolls IV: Oblivion was released, and has been confirmed by the artist and developers that the images do not reveal anything from the actual game. When the countdown finished, the site hosted the first teaser trailer for the game, and unveiled a release date of "Autumn 2008."