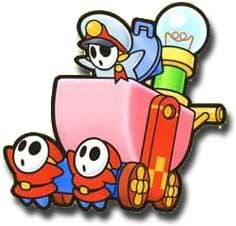 General Guy is the boss of the 4th chapter in Paper Mario.

General Guy is a white Shy Guy that wears an army uniform and commands all the Shy Guys in the Shy Guy Toy Box. He talks in warfare terms and is easily angered.

The first part of the boss fight is not against General Guy himself, but his army of Shy Guys. The first is a giant group, followed by Shy Guy stacks, and then Shy Guys on stilts. Once they're defeated, General Guy drives in with his "tank". He has the ability to throw bombs and shoot lightning out from the light bulb (which can be broken). Watt is very useful in this boss fight, as the tank is weak against lightning.