Gloom (クサイハナ, Kusaihana in original Japanese language versions) are one of the 493 fictional species of Pokémon creatures from the multi-billion-dollar Pokémon media franchise – a collection of video games, anime, manga, books, trading cards and other media created by Satoshi Tajiri. The purpose of Gloom in the games, anime and manga, as with all other Pokémon, is to battle both wild Pokémon, untamed creatures encountered while the player passes through various environments, and tamed Pokémon owned by Pokémon trainers.

The English name Gloom refers to its seemingly sad appearance; the word bloom may be another influence on its name. The Japanese name Kusaihana is a combination of the Japanese words for stinky (臭, kusai) and flower (花, hana).

Gloom has indeed a gloomy expression (although it was revealed in the 3-D games that when they open their eyes, they look incredibly shocked). Bigger than Oddish, Gloom dribbles a kind of ooze from its mouth which is responsible, together with the pollen that emanates from its long petals, for its stench (however the stinking Gloom can become the beautiful Vileplume or Bellossom). Its body is purple and its petals orange. Its petals are similar to Oddish's leaves in a reference to the leaves dying. Its bud also resembles a closed rafflesia flower (a reference to Vileplume's flower). The white markings on this bud are fewer but larger in the female than those of the male.

The fluid that oozes from its mouth isn't drool. It is a sweet nectar that is used to attract prey. Once the prey is attracted, the nectar will cling to the prey, trapping it. The nectar mostly attracts prey that lack a sense of smell, as the nectar smells horrible.

As well as its nectar, the pistil of Gloom's flower smells incredibly foul; it can be smelled from over a mile away. It has been found that approximately 1 in 1,000 people enjoy the scent that Gloom emits. Those that don't enjoy the smell have been known to faint upon smelling it. When Gloom is faced with danger, the stench worsens. If it is feeling calm or secure, it does not release the horrible aroma.

Gloom itself loves the horrid stench it emits. It sniffs the noxious fumes and then drools even more of its nectar. Hence, it is possible that Gloom are attracted to other Gloom that have highly foul scents. However, Gloom are known to confuse themselves at times due to their pollen stench.

Like most Grass Pokémon types, Gloom can hardly move, but it doesn't need to move its limbs to launch an attack.

Gloom are widely available in Pokémon Red (and its remake FireRed), the most common way to obtain a Gloom is through evolving an Oddish (level 21), which can be found to the north of Vermilion City, south of Saffron City, at the route the player encounters after going through the Underground Path. Gloom are also available to the right of Fuchsia City, which the player encounters after taking the south route from Lavender Town. In Pokémon Gold and Silver, it is found on Route 5 only, and in Pokémon Crystal, it is found on Route 24.[1]

It is said to widely shower its attacks; with moves such as Stun Spore, Poisonpowder and Sleep Powder, it has the ability to cause status problems on its foes. It is also notable that Gloom has two evolved forms (from the second generation onwards), Vileplume and Bellossom, however, Gloom can be found more commonly evolving into Vileplume, because in Pokémon FireRed and LeafGreen, Bellossom still remains as an unknown Pokémon until the player defeats the Pokémon League and gets access to the Sevii Islands. Gloom will only evolve through an Evolution Stone - a Leaf Stone will produce a Vileplume, and a Sun Stone a Bellossom.

Gloom is most famous in the Pokémon anime for being owned by Erika, the Gym Leader of Celadon City. According to Episode 26, Pokémon Scent-sation, Erika met Gloom when she was being pursued by a nasty Grimer. Gloom sprayed icky stuff in Grimer's face, thus dissuading the Pokémon from chasing her further. Now Gloom is one of the strongest Pokémon of this Gym Leader.

After Team Rocket cause a fire in Celadon City Gym, trying to exact revenge on Erika for not revealing to them the formula of her perfumes, Gloom is trapped inside the Gym while the flames devour the building. Ash, however, runs into the burning Gym and saves Gloom's life. As a reward, Ash receives the Rainbow Badge from Erika.

Other Gloom had made appearances, cameos, or monor roles in episodes such as Pokemon Food Fight. 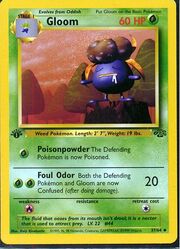 There are numerous stage-1 Grass-type versions of Gloom in the Pokémon Trading Card Game. More specifically, these include: