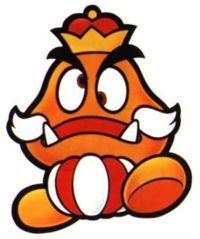 The Goomba King is a character that appears in Paper Mario. He is the first "boss" Mario faces in his journey and appears only in the Prologue chapter.

Sometime after Bowser takes the Star Rod, he employs the help of the Goomba King to block Mario's path. As Mario travels towards Toad Town, the Red & Blue Goomba brothers attack him. Once the brothers are defeated, they run towards The Goomba King's fortress, seeking his aid. When Mario arrives at the fortress, The Goomba King blusters for a bit before the battle begins.

When Mario defeats the Goomba King, him and the Goomba Bros. hide in their fortress, discussing that possibility that Mario may find the switch that is discreetly hidden among the grass that opens the path to Toad Town. After hitting the switch, The Goomba King rises up at the top of the fortress and warns Mario about hitting switches, because you never know what will happen, at which that point, he realizes the switch has already been hit. As his fortress starts crumbling, the Goomba King is launched into the background before disappearing into a star, similar to the Star KO in Super Smash Bros.

The Goomba King is not seen again until the game's ending credits, where he apparently has been stuck inside a tree for the entirety of the game. He eventually drops from the tree with a thud, before resuming a normal pose.

The Goomba King is much larger compared to other goombas and has eyes with pupils that go in different directions, two white tuffs on his cheeks for a mustache and a white and red striped body.