Gran Turismo is a racing game designed by Kazunori Yamauchi, and the first game in the Gran Turismo series. Gran Turismo was developed by Polyphony Digital and first published b y Sony Computer Entertainment in 1997 for the PlayStation video game console. It was well-received publicly and critically, shipping a total of 10.85 million copies worldwide as of April 30, 2008 and scoring an average of 95% in GameRankings' aggregate. The game has started a series, and to date has spawned over 10 spin-offs and sequels. The series has become popular in the Racing genre and has sold millions of merchandise. 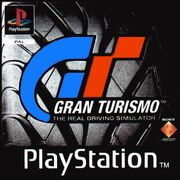 The first time Kazunori Yamauchi requested to make this game, the higher up people did not allow him to. Instead, he made two other games: Motor Toon Grand Prix and Motor Toon Grand Prix 2. He was the main designer for both games and it allowed him to change each car's physics and experiment with the racing dynamics as a whole. He then requested to start Gran Turismo. The higher up at Polyphony Digital allowed him to make it. He then began development on his dream game.

Gran Turismo is fundamentally based on the racing game genre. The player must manoeuvre a car to compete against artificially intelligent drivers on various race tracks. The game uses two different modes: arcade and simulation. In the arcade mode, the player can freely choose the courses and vehicles they wish to use. Winning races unlocks additional cars and courses.

However, simulation mode requires the player to earn different levels of driver's licenses in order to qualify for events, and earn credits(money), trophies and prize cars by winning race championships. Winning one particular championship also unlocks a video and a few additional demonstration tracks. Money earned by winning championships can be used to purchase additional vehicles, and for parts and tuning of all vehicles.

Gran Turismo features 178 cars and 11 race tracks. Unofficially there are 180 cars, but two cars from the Japanese version, the Honda CR-X del Sol SiR and VGi '95, were both cut from the American and European versions. They are accessible on the American version via Gameshark, along with the arcade mode-only Chevrolet Corvette '67 and Mazda Roadster RS '98.

The opening song for the US and European versions is a Chemical Brothers remix of the Manic Street Preachers song "Everything Must Go".

The game itself had a limited selection of songs. These include 'Lose Control' by Ash From the album 1977, 4 songs from the Swim era of Feeder (Chicken On A Bone Reworked instrumental, Shade Instrumental, Tangerine Instrumental, Sweet 16), 'As Heaven is Wide' by Garbage, 'Oxyacetalene', 'Skeletal', 'Autonomy', and 'Industry' by Cubanate. The opening song for the Japanese version is Moon Over The Castle; this song was in all of the Japanese versions of Gran Turismo.