Guitar Hero II is a music game developed by Harmonix and is a direct sequel to the popular Guitar Hero. It was first released for the PlayStation 2 in November 2006 and then for the Xbox 360 in April 2007. The Xbox 360 port has content not featured in the PlayStation 2 version,[1] along with a new controller, modeled after a Gibson X-plorer. 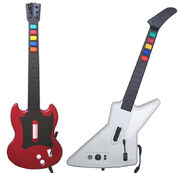 Guitar Hero 2 has a massive 64 playable tracks, 26 of which are the original songs (Stop!, John the Fisherman, and the 24 unlockable songs).

5. Return of the Shred

Guitar Hero II is based on the successful formula created for the first Guitar Hero game; the player may use the guitar peripheral to play scrolling notes by holding the corresponding fret button on the guitar neck and simultaneously pressing the strum bar. Alternatively, one can play with the DualShock 2 or Xbox 360 controller by using 4 shoulder buttons and a face button, mapped to specific fret keys.

Several changes have been made to the gameplay mechanics for Guitar Hero II: hammer-on and pull-off functionality has been improved, and three note chords have been introduced, scored as triple points if played correctly. There are additional statistics available for a song upon completion, and the scores achieved in either Quick Play or Career mode are saved to the same in-game high-score list. The handedness of the guitar can now be toggled from the Pause menu when playing a song (previously, this was only available from the game's main menu). For the Xbox 360 version, scores can also be compared with other players through Xbox Live via the Leaderboard feature, and there are 50 Achievements that can be earned in the game.

Star Power is necessary to scoring and the game itself. One activate which by tilting the Guitar upwards once the Star Power meter is half full, or above. Star power can multiply 0 to 2x, 2x to 4x, 3x to 6x, or 4x to 8x. It also greatly increases the Rock meter which is useful when one is beginning to fail.

The object of career mode is to progress through a series of tiers, each containing five songs. When every song in a tier is completed, the next tier is unlocked, until the final tier is beaten.

In Quick Play, a player simply chooses the song he or she wishes to play, their optimal difficulty, and immediately plays the song.

Practice is new to Guitar Hero II. In practice, players can play songs or sections of songs without the prospect of failing. Players can also choose to slow songs down to make it easier.

One player plays lead guitar while another plays either bass guitar or rhythm guitar, depending on the song. Both players share a score, rock meter, star power meter, and streak multiplier. Cooperative mode is the only multiplayer mode in which a song can be failed. Star power can only be activated by both players simultaneously.

This is the same multiplayer mode as featured in the original game, though in Guitar Hero II both players can individually select their level of difficulty. In this mode, players alternate between playing sections of each song. The scores are weighted so that a player who hits less notes on Easy difficulty may not necessarily lose against an opponent on Expert difficulty who hits more notes.

Players play the full lead guitar track on the same difficulty. For the PlayStation 2 mode, this is available upon completion of any career level,[2] while for the Xbox 360 version, the mode is unlocked after completing the career mode at Medium level or higher.[3] The score system is identical as the song could be played alone, but songs cannot be failed in this mode.

While online multiplayer was not available at the release of Guitar Hero II for the Xbox 360, RedOctane has stated that they hope to be able provide this later once they are able to work out the technical issues.

Some of the loading screens prior to a song are jokes and references specific to that song; for example, before encores, it tells the player never to "just jam" when the audience wants an encore (a reference to the movie This Is Spinal Tap), while prior to "Jordan", the player is told that wearing a bucket on one's head won't improve one's performance, a direct reference to the song's artist, Buckethead.

The drummer spontaneously combusting at the end of "Tonight I'm Gonna Rock You Tonight" is a reference to the movie This Is Spinal Tap, from which the song originates.

The scrolling text on the walls of the school venue contains various lyrics to Alice Cooper's "School's Out".

The chalkboard in the loading screen has various jokes relating to the game on it.

The loading screen "Throw your undies on the stage, no wait you're underage." displayed whenever playing "Less Talk More Rokk" by Freezepop, is a reference (specifically, a lyric) to the song "Super Sprøde", which is a bonus song by Freezepop in the Harmonix PlayStation 2 rhythm game Amplitude.

Clive Winston will use a violin bow to play his guitar when star power is activated with him. This is a tribute to several guitarists, most famously Jimmy Page, who would often do the same thing during performances.

Xavier Stone will sometimes pick his guitar with his teeth when using star power in homage to Jimi Hendrix.

In the sound options section, everything can be turned up to 11, in reference to Spinal Tap.

In Practice mode, the bedroom has many Rolling Stones references. A Their Satanic Majesties Request poster, Let It Bleed album, and a poster of the band themselves in the far right corner.

Clive Winston often lights his guitar on fire at the end of a performance, a reference to Jimi Hendrix's onstage antics.

At the end of the credits there is a hail to Dimebag Darrell, ex-guitarist of Pantera, who was shot on-stage while performing with his then current band, Damageplan.

In the Nilbog high school venue, the clock reads 6:66, the Number of the Beast, a reference to the Iron Maiden song of the same title.