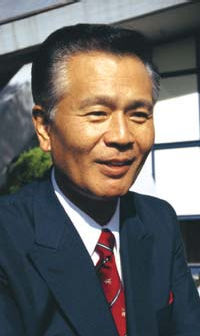 Gunpei Yokoi, (1941-1997) was the creator of the Metroid series, Directional pad, WonderSwan, Nintendo Game & Watch, Game Boy, Game Boy Pocket, and Virtual Boy. He died in a car crash in 1997.

Born in 1941, Gunpei was raised in the city of Kyoto, Japan. Not long after graduating from college with an electronics degree, Hiroshi Yamauchi hired him to maintain assembly line machines used to produce Nintendo's Hanafunda cards. In 1970 Gunpei was assigned to the new Games Department and instructed by Hiroshi to produce "something great" for the upcoming holiday rush. Gunpei introduced an expansion arm toy he had created which soon became Nintendo's first toy, the Ultrahand. With this the "Ultra" series of toys was born, following with the Ultra Machine baseball throwing machine, and the Ultra Scope toy which could be used to look over obstacles such as walls and around corners.

Hiroshi Yamauchi then asked Gunpei to make "something new" after the announcement that Nintendo would begin producing and selling videogames instead of toys. Gunpei created a series of cheaply produced portable games that made use of LCD screens and featured the familiar Directional pad directional input control that is still used on modern day console controllers. These portable games were known as the Game & Watch series. Later, after the launch of the NES console, Nintendo felt they needed to produce a handheld console for gaming on the go. Following the well received Game & Watch series, Nintendo once again consulted Gunpei. In 1989 Gunpei and his R&D1 team unveiled the very first Game Boy, to date the most successful handheld ever produced. With R&D1 Gunpei also created the beloved Metroid series.

Gunpei went on to finish two more projects before leaving Nintendo. First was the Virtual Boy console, which aimed at producing three dimensional graphics by using a stereoscopic display. While the concept was great on paper, the execution was considered by many to be a total failure. The Virtual Boy suffered extremely poor sales, and died a quick death. Gunpei's final project with Nintendo performed much better, however. This was his final creation, the Game Boy Pocket, which was a shrunken down version of the original Game Boy. It was his final great success.

Gunpei handed in his resignation to Nintendo just two weeks after the launch of the Game Boy Pocket. Many assumed his reasons had something to do with the failure of the Virtual Boy, however this was not true. Gunpei was leaving to start his own company, Koto Laboratory. Although he no longer worked for Nintendo, he continued to work with them. Nintendo was to release some of Koto Laboratory's products which included a number of LCD keychain games. While working with Koto Laboratory, Gunpei produced another handheld gaming machine, the WonderSwan. The first game released for the WonderSwan was named "Gunpey".

Unfortunately on October 4, 1997, Gunpei's life was taken in a tragic car accident. He was 56 years old.