Half-Life: Opposing Force is a 1999 expansion pack for the 1998 First-person shooter Half-Life by Valve Software, initially for Microsoft Windows. Opposing Force was developed by Gearbox Software, and pits the player on the side of the HECU military task force, one of the original game's main antagonists. 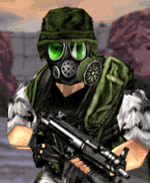 Adrian Shephard, a new military recruit, has been suspiciously bumped up at the military academy to begin special training to join the Hazardous Environment Combat Unit special forces branch of the military. Soon after, Adrian is deployed with the rest of his HECU combat team to control the outbreak at the Black Mesa Research Facility, where they soon become victims to an alien onslaught. Now, with what remain soldiers he can still find, Adrian must carry out his orders to find and capture Dr. Gordon Freeman against all odds.

Expanding upon the storyline of the original Half-Life, Half-Life: Opposing Force pits the player as Adrian Shephard, a Special Ops soldier for the Hazardous Environment Combat Unit deployed to control an alien invasion brought on by an inter-dimensional rift, in what has become known as the Black Mesa Incident. The player must make their way through the various sections of the Black Mesa Research Facility while fending off enemies, solving puzzles, and platforming through hazardous and lethal environments.

The game plays as a first person shooter, with all combat, events, and cut-scenes being presented through the main character's perspective. The player is given an HECU combat vest, which comes complete with a built-in electric armor system that can be recharged using the various HEV chargers throughout Black Mesa, as well as a pair of night vision goggles, allowing the player to navigate through pitch black areas.