The sequel to Halo, a First-person shooter on the Xbox. It features a continuation of the story, as well as the addition of the Covenant Sangheili Arbiter "Thel 'Vadamee". It also has online play over Xbox Live as well as a varied array of other weapons and vehicles not found in Halo. Leading up to the release was an alternate reality game.

As the Master Chief returns from Installation 04, he is welcomed with the new MJOLNIR Mark VI armor, as well as a ceremony in honor of him, the surprisingly alive Sergeant Johnson, and the dead Captain Keyes. Accepting the medal of honor for Captain Keyes is none other than his daughter: Commander Miranda Keyes.

Halo 2's entire campaign can be played co-operatively on one Xbox.

The game can be played splitscreen with up to 4 players on one Xbox. These four players can also join games being played over System Link and Xbox Live.

Some of the nice features provided in Halo 2 were the excellent gameplay and sound. Most of the gameplay features from the original Halo made a return, such having faster recharging shields and no health meter to worry about, hold an offhand weapon, and go into 3rd person riding vehicles. There were also some new features added to improve gameplay. The ability of dual-wielding some weapons was brought into Halo 2, creating a more broad range of available strategies to use. The two Covenant vehicles, the Banshee and Ghost, received afterburners that allowed them to travel at higher speeds, but not shoot. The banshee could also do rolls in the air. One more interesting feature was the ability to hijack vehicles. It gave a major twist to the gameplay as a driver could be pulled out of a vehicle, human or AI. Seeing Master Chief bash through the hull of a tank and grenading the crew was also a nice sight. The audio still retained some good music as it did in the original. Some music still plays at proper times to add a kick in the game. Also, it kept the sounds for low/regenerating shields. The sound quality is good enough that the player almost never needs to look at the HUD for a second and can instead concentrate on the game. The graphics are not too bad and load time in between stages have been eliminated. The AI is praised since they do not always do the same thing over and over. Replaying a level can almost always guarantee different results and reactions from the AI.

Halo 2's online functionality was shut down by Microsoft as a part of their discontinuation of support for the original Xbox. While most of the DLC maps are available on a map pack disc release, the final two maps created by Certain Affinity (Desolation and Tombstone) are now currently unavailable for users who did not download them before the shutdown. 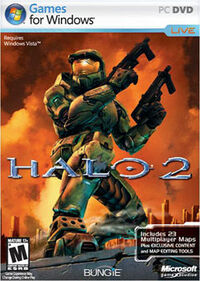 Halo 2 Vista is a ported PC version of Halo 2 by Hired Gun for use on the Windows Vista operating system exclusively and as a release title for the "Games for Windows" category. The release date was originally planned for May 8, 2007. However, the release date had been delayed to May 22, 2007 because the team needed "to make some improvements to the install experience and address other technical issues." However, release dates had been erratic, as Australia had publicly available copies, and some stores in the United States were selling copies as well. Microsoft had stated that the release date had been pushed back one final time, due to partial nudity found in the Halo 2 Vista Map Editing Kit, making the release date May 31 for the United States.

Halo 2 Vista has been reworked graphically for the PC, including high-resolution textures and support for very high resolutions. While the single player campaign does not differ from the Xbox version, they can earn firstly tried and all new single- and multiplayer achievements. One of the selling points of Halo 2 Vista is an included map editor. It has include the same programs as previously used in the Halo Editing Kit and also includes a pre-made "custom" map by default, named Example, which was made for players to observe as an example for making their own custom maps.

A new ability pushed by the Microsoft team is a feature called "Tray and Play". It is an attempt to emulate the ability of consoles to instantly play new discs in a DVD Drive without installing them. It allows the end-user to play the game as it is installing.

Halo 2 Vista, being a release title of Games for Windows, includes support for the Live for Windows system. It intertwines with the Xbox LIVE system, allowing communication with someone who has an Xbox. However, cross-platform play is not supported (this feature was planned). The interface is similar to that of the Xbox 360 dashboard. Instead of using peer to peer matchmaking, players will be able to create dedicated servers, which are created with a program that comes with the disc.

Gamertags, which are used on Xbox Live, are also used on Live for Windows. If a player were to have an Xbox Live gamertag, they would be able to log on using that. Otherwise, a free account can be registered for a player. Players can also match up in parties, and the party leader can specify maps and game types to play on the go.

The minimum system requirements to run Halo 2 on Windows Vista is a Windows Experience Index of 3.0. The recommended system requirements is a WEI of 5.0. Users can play the game with a rating of less than 3.0 but they will have to reduce graphics quality in order to run the game smoothly. The game can be set on different levels of detail (low, medium, or high) to change performance and appearance. Anti-Aliasing and resolution can be changed, as well.

Halo 2 Vista was considerably less popular than the Xbox version of the game. Besides selling incredibly low due to the negative reception of Windows Vista, it also was far less highly rated than the Xbox version. The game netted a mere 72% from Metacritic, a site which regulates and moderates reviews from other websites.[1][citation needed] Game Informer cited the outdated graphics and lack of innovation, which they said made the game feel "too outdated for a next-generation PC game, especially compared with how stunning Halo 2 had been on Xbox".[citation needed]

Halo 2 Vista was rated M for Violence, Language, Blood and Gore, and also Partial Nudity, which the Xbox version lacked. It turns out that a bug in a .ass error appeared to show the butt of a naked man. This can be removed simply with a patch downloadable from the Halo 2 Vista website.