The Helmaroc King is a bird creature that appears in The Legend of Zelda: The Wind Waker serving Ganondorf in the manner of kidnapping young girls with pointed ears such as Link's young sister Aryll and bringing them to the Forsaken Fortress in order to find the one who possesses one of the three parts of the whole Triforce. Link faces this creature twice during the game at the Forsaken Fortress, with the second time being his actual battle encounter where he uses the Skull Hammer to smash the bird's helmet. 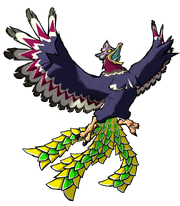 Once the Helmaroc King is defeated, the path to Ganondorf's lair is revealed, and the confrontation between Link and Ganondorf escalates.