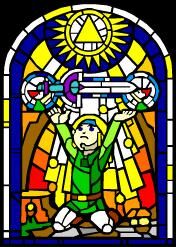 See single Triangle above him? That's the Light Force, not the Triforce... Yeah, Minish Cap was weird like that. 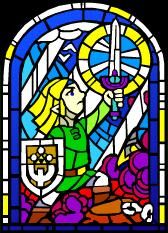 An apparently non-Link hero from an as of yet untold story in the Zelda world. He saved Hyrule from evil using the Picori Blade in the prologue to The Legend of Zelda: The Minish Cap.

He looks a lot like Link, but sports a blue bandanna in place of Link's green cap. This makes it seem unlikely that he'd ever be in a Zelda game as the playable character, as Link invariably wears a green cap. His hair also seems to be more California surfer dude and not very Link-like. He does look surprisingly similar to the human version of Vaati, but as far as Zelda lore suggests, there is no connection between the two.

He holds out both hands to grab a sword at both ends instead of just picking it up like a normal person... Maybe he is Link.