Hoothoot (ホーホー, Hōhō, Hoho in original Japanese language versions) is a species of Pokémon, in the fictional animé and video game universes of the same name. It evolves into Noctowl.

Hoothoot's name is the word hoot (onomatopoeia for the sound made by owls) repeated twice.

Hoothoot is also the name of this pokémon in German and French. In Japanese, its name is Hōhō (ホーホー).

Hoothoot is one of two owl pokémon (the other one being its evolution, Noctowl); Hoothoot is the smaller of the two, and can fly, it is similar to the burrowing owl. It is omnivorous and nocturnal.

Hoothoot's most notable feature is that it seems to have one foot. However, it actually has two feet; at least one is retracted against its body at almost all times, and Hoothoot can switch between one foot and the other at speeds almost too fast for the human eye.

Hoothoot are also known for having precise senses of time, due to a special mechanism in their brain that measures the rotation of the earth. Properly trained, they can be more accurate than all but the most precise of clocks. In nature, they always begin hooting at the same time every night. The feathers (or what could be described as feathers) on its forehead also slightly resemble a clock's hands and the markings under its eyes give the impression of the cogs in a clockwork mechanism.

Hoothoot can be caught in four games. In Pokémon Gold and Silver, it can be found in the National Park and in multiple routes. In Pokémon Crystal, it can be found in every route it was found in Gold and Silver, as well as in multiple other routes and Ilex Forest. In Pokémon Emerald, it can sometimes be found in the Safari Zone Extension. It can also be obtained by breeding Noctowl (which can be obtained from Pokémon Colosseum). Hoothoot can also be caught by using the move 'Headbutt' on a weak tree. If Headbutt is used on the tree in the day, the Hoothoot that falls out will be asleep.

Hoothoot has mostly low stats, and is a harder Pokémon to train. Hoothoot is mostly used in battle to gain the experience needed so it can evolve into Noctowl at level 20.

Hoothoot is also catchable at night in the Great Marsh in Pokémon Diamond and Pearl.

Hoothoot is most notable in the pokémon anime series for being used by Falkner, one of the setting's gym leaders. Other than that, it is usually seen as being owned by pokémon trainers who are intellectuals or who are 'busybodies.'

Hoothoot was seen used by a trickster in Volume 8. He claimed to use Hoothoot as an accurate timekeeper to regulate a prize-winning game he was hosting, when in fact he was prompting Hoothoot to declare the time limit whenever a participant was on the verge of winning, thus preventing anyone from winning his game. He was busted, however, by Gold and his Aipom.

The same man and his Hoothoot are seen in Volume 11 and Volume 14. 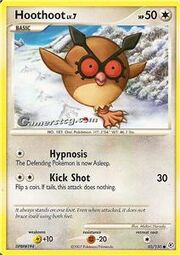 Hoothoot has made only three appearances in the TCG. All as a basic stage colorless pokémon in the following expansions: