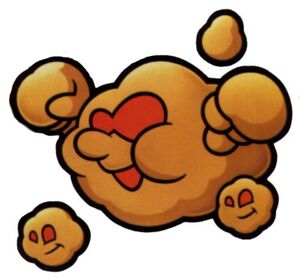 Huff N. Puff is the boss of the 6th chapter in Paper Mario.

Huff N. Puff is a giant brown cloud monster that has secretly been controlling the darkness over Flower Fields. He is a huge boss, but it is later revealed that he is actually made up of several "Ruff N. Puffs". He has several different moves including his lightning attack that does 12 points of damage.

Huff N. Puff is one of the hardest bosses is in the game. He has a multitude of abilities: lightning strike, wind blowing, electrical charge, stomp, and the ability to "suck up" Ruff N. Puffs to heal himself. The Ruff N. Puffs also suck the life from Mario, so it's best to use moves that damage all enemies.