Ikaruga is a top-down shmup by Treasure. First released in arcades in 2000, it used Sega's NAOMI hardware. In the game, the player pilots a ship which can alternate between two polarities, represented by the colors black and white. While the ship is white, only black bullets can destroy it, and vice versa. This provides an interesting challenge as enemies shoot out mesmerizing patterns of black and white bullets through which the player must navigate. 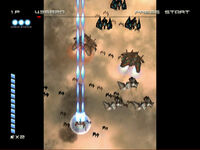 The basic concepts are easy to pick up, but Ikaruga is very difficult to master. By switching between the two polarities the player can absorb bullets of the same color, while the opposing color destroys you. You also do more damage against enemies of the opposing color. If enough bullets are absorbed, they can be launched again in a hail of homing laser beams that do immense damage.

The scoring is primarily based on chains. To perform a chain, three enemies of the same polarity must be killed in a row. Each unbroken chain after the first increases the score.

There is little randomization in the game—enemies always appear in the same patterns. Some have critizised it as requiring more of a player's memory than reflexes in order to gain the most points, because all of the enemies and chains appear exactly in the same place and time every time the game is played, with a few exceptions.

Despite this it still takes a large amount of skill and practice to be able to perform a complete, uninterrupted chain across an entire level.

Another technique is the bullet eater. In this variant, you complete the levels without firing a single shot and simply absorb the bullets the enemies fire at you. 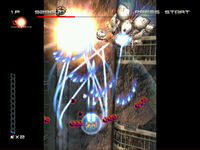 The game uses its high production values well, with full three-dimensional landscapes and a strong soundtrack. It also has a TATE mode—the ability to rotate the game's display by ninety degrees while the player's monitor rests on its left side (for full-screen arcade size). When the game is played with the display in a normal orientation, the sides of the screen are blank because the game field itself is taller than it is wide. If it is turned on its side, it can take up the whole screen and still be taller than it is wide.

The GameCube release of Ikaruga is a very faithful port of the arcade version, with lots of additional modes. These include a training mode where you can replay individual sections of completed levels, optionally at half speed; replay movies of playthroughs that complete the game flawlessly, and more.