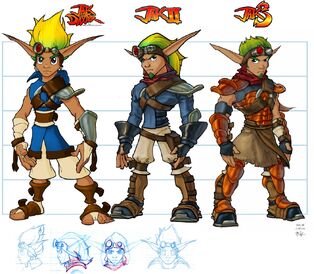 Jak's change through the series

Jak is the main character in the Jak and Daxter video games. He does most of the action in the game while his partner Daxter (formerly humanoid, now an ottsel) provides the verbal commentary and the reactions. In the first game, Jak & Daxter: The Precursor Legacy, he didn't have much of any vocabulary, preferring adventuring over talking. In the second game, Jak was transformed into a Jekyll-and-Hyde through the use of Dark Eco experiments done on him, which made him very angry and ready to make whoever did that to him pay.