Java (not to be confused with JavaScript) is a programming language that uses a platform-independent portable software layer that is designed to run software virtually identically across a wide variety of platforms and architectures. Java by default refer to the Java originally developed by Sun Microsystems, now owned by Oracle Corporation, but other software is capable of running Java applications, such as OpenJDK, and in the past, the Microsoft Virtual Machine, before an anti-trust lawsuit forced Microsoft to stop offering it for download, and to develop a tool to allow users to completely remove it from their systems.

"Write once, run everywhere." is the motto of the Java platform. Java Edition includes the Java programming language and the Java core library. Users who want to play Java games must install a Java Runtime Environment onto their computer, though some operating systems include one. 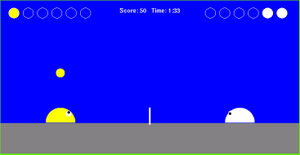 Slime Volleyball, an example of a Java applet.

Java 1.0 introduced the concept of a Java applet, a rectangular zone on a web page that could display a Java program. If you wanted to play Slime Volleyball, for example, then you would open a web browser like Netscape Navigator 2.0 or Microsoft Internet Explorer 3.0, and visit a web page with the game.

A security manager applied itself to Java applets, to prevent applets from accessing your files or doing any other unsafe activity. Java programs are compiled into bytecode, not native machine code, so Java applets worked on different types of machines. You could play Slime Volleyball on Mac OS, Solaris, or Microsoft Windows.

Why there were few Java applets[edit | edit source]

Java 1.0 had some interesting programming features; string objects were in Unicode, and allowed Java to handle international languages. URL objects also provided an abstract way to connect to a network; the garbage collector prevented memory problems that would otherwise cause crashes. Java was simpler than C++ and became popular in educational fields.

But the Abstract Window Toolkit, the part of the Java core library for accessing native Mac OS, X11, or Microsoft Windows widgets, lacked features, and had an inefficient event model. Sound had to be a ".au" file at 8000 Hz quality, and images were not easy to load. Such a poor set of features did not attract many game programmers.

Newer versions of Java made improvements, but Apple, Microsoft and Netscape forced their users to use Java 1.1, even though programmers wanted to use Java 1.2 or later. Just installing the current version of Java onto an operating system became an obstacle. 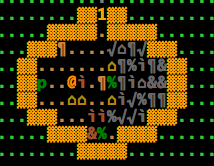 Currently, there are not many large scale games using 3D graphics in Java. The largest and most complex games to use Java are arguably RuneScape and Minecraft. Initial developer installations of Java did not provide a programming interface for 3D graphics. Note, however, that since Java is interpreted bytecode, Java may be too slow for CPU-intensive games that would normally require a faster computer with a lot of computational ability.

Java on the server[edit | edit source]

Some web server administrators were able to install Java and use it to script their web servers. Java is a lower-level language than Perl, PHP or Python, but some CGI programmers prefer Java.

Apple does not port current versions of Java to older versions of macOS. Running new Java programs may require you to upgrade to a superior macOS version.

There are free alternatives to Java that have been ported to more platforms. They implement most of Java 1.4, but also have other features. Most of them use GNU Classpath for their core library. Look at JVMs that use Classpath or try GCJ or Kaffe. You may be able to use them to play Java games on Linux or BSD.

Some Linux distributions, like Ubuntu, include a free alternative to Java, OpenJDK.

The OpenJDK project has HotSpot, a Java bytecode interpreter, and Javac, the Java language compiler.