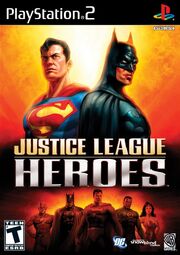 Justice League Heroes is a console video game for the Xbox, PlayStation 2, Nintendo DS, and PlayStation Portable systems. It is based on DC Comics' premiere superhero team, the Justice League of America. It was developed by Snowblind Studios and published and distributed by Warner Bros. Games for all systems except Xbox which was distributed by Eidos Interactive in conjunction with DC Comics. It is based on the long running comic book series, (as opposed to other recent Justice League games which are adaptations of other media besides the source material) and was written by veteran comic book and Justice League of America writer Dwayne McDuffie.[1]

Two handheld Justice League Heroes games were released at the same time for the GBA and Nintendo DS systems. The Nintendo DS game shares a similar visual style and gameplay mechanics to the console game, but serves as a prequel to its story. This version was developed by Sensory Sweep Studios. The GBA version is titled Justice League Heroes: The Flash and focused primarily on The Flash. The game featured 2D sidescrolling action gameplay (similar to 16-bit era games) and a sidestory to the console game's plot. This version was developed by WayForward Technologies.

The game starts with Superman and Batman foiling an attack on S.T.A.R. Labs by robots controlled by Brainiac. After the two superheroes defeat what they think is Brainiac, they discover that they have merely been diverted by a duplicate while another has raided the vaults of the Lab, taking Kryptonian DNA and a chunk of meteorite. Meanwhile, Zatanna and J'onn Jonzz (the Martian Manhunter) face off against Queen Bee and her drones, who are being assisted in their gradual conversion of Metropolis by some of Brainiac's robots. After Metropolis has been saved, the League responds to a series of attempted nuclear missile hijackings; firstly, The Key attempts to hijack a missile before he is subdued by the Flash and Green Lantern (John Stewart), followed by an attempt by Killer Frost which is foiled by Zatanna and Wonder Woman. Despite the League's efforts, one missile is launched undetected during a worldwide communications blackout caused by Brainiac.

However, the League realize it has been upgraded; capable of breaking Earth's orbit, the missile has actually been fired at Mars in an effort to free the White Martians, who will invade Earth upon being rewoken. Superman and J'onn J'onnz travel to Mars to stop them from escaping; but this has been yet another diversion from Brainiac who, anticipating their success, took the opportunity to steal vital equipment from the White Martians. Brainiac has also freed Gorilla Grodd from imprisonment, who intends to take revenge on his jailors and humanity with use of his Earthquake Machine. While Wonder Woman assists Superman in stopping the few White Martian vessels that managed to escape Mars and J'onn Jonnz returns to the Watchtower, the rest of the League (including any unlocked characters the player may have accessed by this point) work together to stop Grodd. Alone on the Watchtower, J'onn is ambushed by Doomsday who takes him prisoner and takes over control of the Watchtower while Brainiac steals a Mother Box from the League's vaults. Regrouping in an emergency bunker, the League manage to retake the Watchtower, free J'onn and defeat Doomsday, before confronting the real Brainiac in his lair.

Seemingly defeated, Brainiac suddenly returns to life as the Mother Box he has stolen activates - and screaming, he is absorbed into Darkseid, released from an interdimensional prison created by a Sensory Matrix Field Generator, who has been manipulating Brainiac all throughout. Confronting the League, Darkseid - his powers augmented by the Mother Box - sentences the league to his fate by banishing them to another dimension with his Omega Beams all except Superman. He then proceeds to transform Earth into a new Apokolips and holds Superman prisoner in a Kryptonite jail. The dimension the league arrive in is complete with both teleporters to allow them to escape and radiation that will allow them to survive Darkseid's Omega Beams. In a glaring continuity error the league discuss how they survived Darksied's omega beams despite the villain clearly stating he was exiling them just before he attacked. Regrouping, the League return to Apokolips Earth, rescue Superman, and Superman defeats Darkseid in his throne room, imprisoning him once again in his interdimensional prison and restoring Earth to normal. In the Watchtower, Batman informs the others that if a danger like this should happen again, they would be there.

There are an additional 4 supervillains unique to the Nintendo version of the games: GBA & DS Circe and Zoom DS only General and Prometheus.

The game features most of the best known superheroes from the DC Universe, including Superman, Batman, and Wonder Woman among others. Each level consists of two members of the Justice League battling a variety of villains and their henchmen. When the game is being played by a single player, the player can freely switch between both of the two Justice League members and play as whichever one he or she prefers. In a two player game, the players can only switch which characters they control by mutual consent. There was another Justice League game in development from Midway Games that was canceled in 2004 but, according to Warner Bros., this game is "totally unrelated to the current project."[1]

Upon starting a new game, there are seven different characters that the player has immediate access to but more characters (as well as alternative costumes) can be unlocked as the game progresses. These unlockable characters can only be used on levels in which the player(s) can choose which characters to take whereas the costumes can be used at any time.

Each of the seven main characters has a least two skins that can be purchased in the same manner as the unlockable characters. These alternative costumes vary the characters game stats by small amounts and recreates classic or alternative costumes from the character's history. For example, Superman and the Flash can be made to look like their older counterparts from the Earth-Two universe (Jay Garrick included) while one of the alternative costumes for Batman is the famous blue and grey costume with the yellow ellipsed bat emblem on his chest. The unlockable Green Lanterns have exactly the same powers as John Stewart and are effectively just changes to the costume, voice, and minor visual differences in their powers, ex: John Stewert has a rectangular shield, Rayner a triangular one.

The console versions were praised for customization and co-op gameplay, but the combat was considered too simple.[2][3][4]

The DS version was not received as well by many fans,[5] with Nintendo Power giving it a 3.5, GameSpot a 5/10[6] and IGN a 4.4.[7] The GBA version received generally positive critical response.[8]