Koffing is a spelling variant of coughing, one of the reactions experienced when in proximity of Koffing's noxious gases.

The Japanese name uses the English loanword "gas" (which is used by Japanese to refer to both gasoline and the state of matter), with the prefix "do" meaning "bad" or "poisonous".

Koffing resembles a purple floating sphere with large pores over its surface that release poisonous gas. These pores also make it resemble a naval mine. It has two eyes, a vacant, blissful expression and a skull and crossbones pattern (the universal symbol for poison) on its front. In Pokemon Red and Blue, however, this symbol appears on its forehead.

Koffing's thin, filmy and transparent skin stores a collection of highly toxic gases that swirl in its insides. These gases have a density slightly less than that of air, allowing Koffing to float and hover above ground like a hot-air balloon.

Koffing concocts its internal gases and increases their toxicity by mixing raw garbage, setting off complex chemical reactions whose rate and products are proportional to the area temperature. If the temperature rises too high, however, there is a chance that the pressure exercised by the gases on Koffing's body will become too great, causing it to expand and finally explode. However, it can seemingly reform itself once blown up.

Koffing can also make itself explode at will if sufficiently provoked by overinflating itself. While this behavior is also shared by Voltorb and Electrode, Koffing is not known to explode as frequently and unpredictably.

Besides self-destruction, Koffing can employ less dramatic defensive measures. It can expel its gases to the surrounding area through pores on its surface. The vile gases can cause coughs, tears, poisoning or suffocation, in all cases potentially incapacitating Koffing's foes and shielding it from attack.

It is interesting to note that in Pokemon Red and Blue versions, Koffing's sprite placed its skull-and-crossbones marking above its mouth and eyes, but in later versions, the marking was below its face.

Koffing's defense stat is very good, but the rest of its attributes are low or average. One useful strategy for Koffing is to poison the opponent and prevent them from attacking by using accuracy-lowering moves. Koffing's Levitate ability gives it an immunity to Ground-type attacks, a type against which Koffing is normally weak.

Koffing has a cameo in the Nintendo platform-fighting game Super Smash Bros. as one of roughly 15 Pokémon which may emerge from thrown Poké Balls, often juggling opponents with its damaging Smog attack. It was replaced by its evolved form, Weezing, in Super Smash Bros. Melee.

Koffing are also found in the Nintendo 64 game Pokémon Snap in the Cave Course. They chase three Jigglypuff through the air around the player’s vehicle in the Cave course. Also, during the Volcano course, a smokey image of Koffing will appear when a Pester Ball is thrown into the first Volcano. Taking a photo of this image is necessary to advance to the seventh and final course in the game.

In Pokemon Mystery Dungeon 2:Time & Darkness Exploration, a Koffing is one of the members of the notorious new enemy team Team Poisonrose, along with Zubat and their evil leader Skuntank.

Prior to its evolution into Weezing, James of Team Rocket used a Koffing in battle. It was revealed in the episode The Island of Giant Pokémon that James got his Koffing for Christmas. In A Poached Ego, James released his Weezing to protect a herd of wild Koffing from a Pokémon poacher. Koffing was often portrayed as being dim-witted, but very loving towards James.

Koffing is seen as one of Koga's Pokémon. When Koga and Green are ambushed by Agatha's Gengar in Volume 7, Koga uses Koffing's smoke to relay his tactical plan to Green without Gengar noticing. 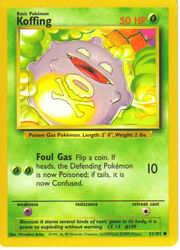 Koffing, as seen in the Pokémon Trading Card Game

Koffing has made some appearances in the Pokémon Trading Card Game, all as Basic Pokémon: