Codex Gamicus
Register
Don't have an account?
Sign In
Advertisement
in: Articles that need an Infobox, Games, Sports games 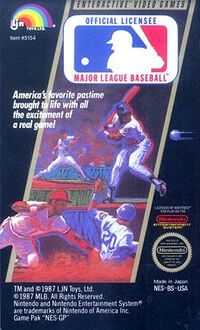 Officially licensed by Major League Baseball, the most immediately visible aspect of the game is that it features all twenty-six teams that existed in 1987. In addition, the lineups and the player numbers are accurate to the team rosters that year. Since the game did not have the endorsement of the Major League Baseball Players Association at the time, the team members are only listed by number, not name. This means that, in modern times, it is difficult to ascertain who the actual players are. In addition to their numbers, the players are represented by their statistics, abilities, throwing arm and even placement in the batting order. 1988's Major League Baseball was therefore the first NES game to be officially endorsed and to feature accurate contemporary lineups, albeit without the actual player names attached to their numbers.

Managerial decisions are an important focus and, based on the reviews, a large portion of the appeal of this version. Game players are allowed to select their own lineups, although the game lacks Sabremetrics statistics due to the limitations of the era. Instead, the "manager" must make their decisions based on data such as player's average and home run totals. They also have the ability to change and decide who will be a pinch-hitter and who will be a substitute pitcher. One is even allowed to pick out a designated hitter. The game prohibits one from putting out more team members in a certain part of the field than would normally be allowed, which makes deciding which player will be used where a crucial part of the experience. There are three modes that can be played with teams from either the American League or the National League: regular season games, All-star games or the World Series. The World Series rounds, however, are only one match each, which is not accurate to the real World Series. Due to the licensing, the teams even appear complete in their official uniforms and colours and also have all the options that a real baseball player would have, including bunting, pitching out, base stealing and throwing errors.