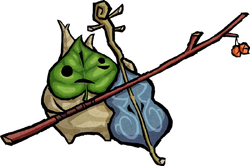 Makar is a Korok who lives on the island of Forest Haven in The Legend of Zelda: The Wind Waker. He plays a cello made from a leaf as his musical instrument. He was initially lost in the Forbidden Woods, and Link had to go rescue him before he could obtain Farore's Pearl. Later on, after Link plays the Wind God's Aria, Makar realizes that he is the new Wind Sage and helps the young boy take him to the Temple of Wind to restore the Master Sword's power to repel evil in order to stop Ganondorf.