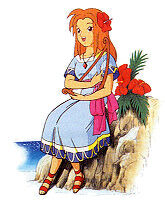 Marin is a woman who appears in The Legend of Zelda: Link's Awakening. She saves Link in the opening sequence. As the game advances, she starts showing much fondness for Link, and soon develops a bit of a crush on him.

As the game begins, Link awakens in Marin's house after washing ashore on Koholint Island. A groggy Link mistakes Marin for Princess Zelda due to their physical similarities (stated by the Link's Awakening manual).

As the game progresses, Marin teaches Link his first Ocarina song, "The Ballad of the Wind Fish", not to be confused with the song of the same name in Majora's Mask. At one point, she also follows Link about in order to help wake a sleeping walrus. This part of the game is notable for comical moments such as when the two fall down a well and when she grabs the operator of the trendy game using his mechanical crane. Later, she is kidnapped by monsters and stranded on a broken bridge. Link saves her using his hookshot.

In a secret reward ending, if a player completes the game without losing a life, Marin is granted her wish and becomes a seagull so that she can fly to distant lands and sing to bring joy to others, but only in the original version of the game, or when playing The Legend of Zelda: Link's Awakening DX. The DX version carries a slightly different ending, containing a face-portrait of her, followed up by the original secret ending.

Malon and Talon from The Legend of Zelda: Ocarina of Time are based on Marin and Tarin respectively.

Marin appears in Super Smash Bros. Melee as a Trophy as a reward for getting all characters and levels, which also unlocks the Sound Test.