Mario Kart DS is the fifth installment of the Mario Kart series (sixth if Mario Kart Arcade GP is included). Mario Kart DS was one of the first games announced for the Nintendo DS and was pushed back from its originally estimated release of early 2005. Unlike Mario Kart 64, which features sprite-based characters against a 3D background, Mario Kart DS features a three dimensional world entirely.

Along with Animal Crossing: Wild World, Mario Kart DS is the first DS game to support Nintendo Wi-Fi Connection. Using friend codes, players could race one other and show custom decals on their kart.

The action takes place on the top screen while a map is visible on the bottom screen. Unlike the the previous installments, the player can both hop and power slide. The game removes the dual-kart mechanism present in the preceding Mario Kart game: Mario Kart: Double Dash!!.

The racing itself has not changed much from previous iterations of the franchise. They focus on simple, arcade-style controls instead of realism. Players use different weapons from the Mario series, such as Koopa shells and stars against each other, while racing along crazy twisting tracks. Mario Kart DS includes its own unique tracks and throwbacks from preceding instalments, which are recreated to have a three dimensional setting.

In addition to traditional races, there is a revamped battle mode and a mission mode. The battle mode features player-vs-player combat, where each player begins with one balloon that represents their life. In another twist, players can inflate additional balloons by blowing into the DS's microphone or by holding down SELECT.

The other feature is a mission mode, where the player has to meet a given objective within a limited time. Examples include driving through power slides, or collecting certain a number of coins within a time limit. Each stage also has a boss battle, with bosses like Big Bully, who has to be pushed in the water using Mushrooms, or racing Goomboss while it releases other Goombas to slow down the player. 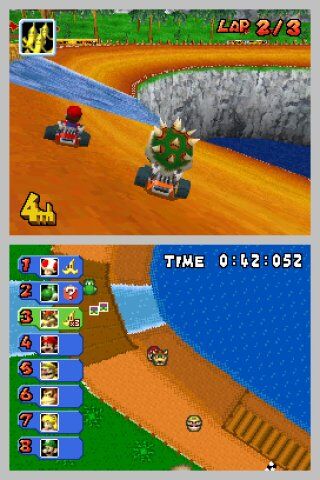 Mario and Bowser driving through the waterfall in Yoshi Falls.

There are six battle stages, two of which are from preceding installments of the Mario Kart series.

All items are activated when either the X or L buttons are used. Holding the button allows certain items to be dragged behind the player's kart.

Triple Bananas, Triple Green Shells and Triple Red Shells do not appear in Wi-Fi Races due to potential lag problems. Dragging items behind one's kart is disallowed for the same reason.

The Mario Kart series have many obstacles in almost every course. This section lists all of the obstacles and hazards in the tracks:

Emblems are one of Mario Kart DS's new features. An emblem is a decal or picture which appears on the player's kart.

The emblem appears only at certain places on a kart, and depending on where its put, the emblem may be smaller, bigger and/or stretched out. The player can customize the emblem and choose from various patterns such as Starman, Thunderbolt or Mario's face. The player can also use the default emblems and not have a customized one. Emblems are displayed during VS matches and online matches via Nintendo Wi-Fi Connection.