Marvel: Ultimate Alliance is an Action role-playing game announced by RavenSoft and Activision for Fall 2006. The companies said the game, previously referred to as Marvel Legends, features over 20 playable characters and more than 140 cameo appearances. a 2009 sequel called Marvel Ultimate alliance 2 was released 3 years later.

Dr. Doom has formed a new Masters of Evil in order to steal Odin's power. They then launch an attack on a S.H.I.E.L.D. helicarrier. Nick Fury sends out a distress call to all available meta-humans. Captain America, Thor, Spider-Man and Wolverine respond and proceed to eliminate Doom's forces. The heroes then travel to various locations in order to stop Doom's plan and, of course, save the world.

The game will have over 140 characters from the Marvel Universe appear. Players will be able to create teams, and have online and co-operative play, for up to 4 players. In co-operative mode players will have to fight for the most kills in order to get the experience points at the end of the level. Unlike X-Men Legends II: Rise of Apocalypse, in which players can only play danger rooms that have been unlocked or single player progress, players can now play through the whole level from start to finish. There will also be special comic book missions, revisiting a moment in a character's past and facing a classic arch rival. Characters will have four skins, which can alter stats of the character, as well as unique controllable powers

Players will fight in mid air, underwater and on the ground, with fully destructable and interactive environments in over 17+ locations, travelling around the Earth and universe back and forth by the end of the game. The game will have alternative endings, affected by the decisions the player(s) make.

There will be exclusive characters for the PSP, Wii, Xbox 360 and PS3.

The game is due to be released for 6th and 7th generation consoles, as well as the PC. The graphical engine and looks will differ between the various platforms. For the 6th gen consoles, characters models will be similar to X-Men Legends: cel-shaded and almost cartoonish. The 7th generation versions will feature more detailed character models and environments. The PC version will vary depending on the customization of a user's settings, though at the best settings, the graphics will be at least par with the 7th generation versions. The PC version will also feature "intuitive mouse controls". [1] 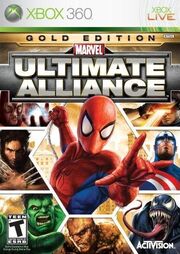 Marvel: Ultimate Alliance: Gold Edition has all 8 downloadable heroes and villains for the Xbox 360: Cyclops, Dr. Doom, Hawkeye, Hulk, Magneto, Nightcrawler, Sabretooth and Venom. It is currently available in the U.S. and Canada. The content is also available for download on Xbox live. Marvel: Ultimate Alliance: Gold Edition was released May 29, 2007

Marvel: Ultimate Alliance's graphics will be reduced to a lower graphics quality for the GBA version. 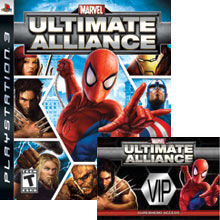 The Wii version will feature:

Characters that appear as alternate skins are listed under the original character.

From the early screenshots and preview provided throughout the early stages and works, certain locations are already confirmed (it is known that there will be more than 17 locales in total). It's important to note that despite the game's title, the game does not take place in the Ultimate universe. Also, there is no word that it definitively takes place in the Earth-616 universe, or the same world as X-Men Legends.