Codex Gamicus
Register
Don't have an account?
Sign In
Advertisement
in: Stubs, The Legend of Zelda stubs, Link's items,
and 2 more

The Blade of Evil's Bane, aka The Master Sword, is likely the most famous weapon in the long running The Legend of Zelda series. It is Link's main sword. Besides being powerful, the sword is also known as being legendary, being wielded by numerous Link incarnations throughout history. 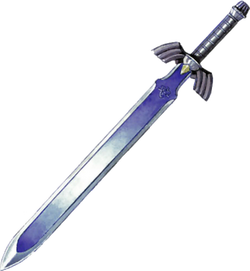 It's first appearance came in The Legend of Zelda: A Link to the Past, and has been a significant point in every Zelda game since. The quest of getting the Master Sword is often a very dramatic moment in the games, with the game almost being officially kicked off once Link reaches it.

The sword is, somehow, connected to Evil. In The Legend of Zelda: Ocarina of Time and The Wind Waker, releasing the sword also helped the villain Ganondorf in some way. At the same time, drawing the sword allows the hero to finally defeat the threat of Ganondorf and save Hyrule.

The master sword does not appear in The Legend of Zelda: Phantom Hourglass or Spirit Tracks, but the main swords in those games bear a resemblance to it.